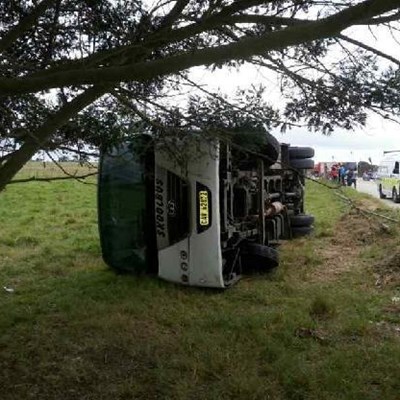 Carpe Diem has thanked everyone who assisted the Carpies when their school bus landed on its side in Glentana. Photo: Metro Rescue Services
GEORGE NEWS FLASH - A 33-seater Carpe Diem school bus that was collecting pupils from the farms in Glentana, landed on its side on a gravel road late on Sunday afternoon 21 February.
It would appear that the driver lost control of the bus.
Roger Jacobs, head of Specialised Learner and Educator Support (SLES) at the WCED’s Eden District Office, said, “Six children were hospitalised after the accident but were released a few hours later. The department arranged for trauma therapy for the pupils who needed it. The parents were informed of the accident.”
Jacobs visited Carpe Diem School on Monday morning and said all the pupils were at school.
“We were told by the pupils that they helped each other out of the bus despite their physical handicaps and being badly shaken by the ordeal. It seems as if we are going to have to recognise a few heroes in the future,” said Jacobs.
Read more in Thursday's George Herald, and online.
'We bring you the latest George, Garden Route news'