Choo-Tjoe: News to be released soon 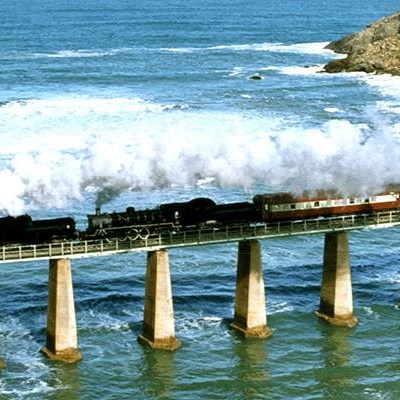 The iconic Outeniqua Choo-Tjoe.
GEORGE NEWS - The clearing of the overgrown railway line near Knysna is the first concrete sign of the much-awaited return of the iconic Outeniqua Choo-Tjoe service between Knysna and George.
It has been reliably learnt that a deal is being struck in Johannesburg between parties who have been working for many years to reinstate the railway service. However, due to the sensitive nature of the negotiations, which are taking place on Friday 10 June, the George Herald at this early stage will not be revealing more details about who the parties involved are, and how the service will be reinstated in several phases.
A formal announcement will be made within the next few days once the necessary details have been ironed out. For Friends of the Outeniqua Choo Tjoe and steam enthusiasts throughout the world, who steadfastly refused to give up on the dream of seeing a return of the trains of yesteryear, it would seem their patience is now at last being rewarded. The Choo Tjoe service came to a grinding halt in 2006 when floods washed away sections of the railway line near Kaaimans Pass. Torrential rains the following year caused extensive damage to the railway line, and it was predicted it would costs millions of rands to repair the infrastructure.
Another blow was on17 September 2010 when the Outeniqua Choo Tjoe made its way from George to Mossel Bay and back for the last time, after being in operation for 88 years. At the time Transnet did not consider this section of the line profitable enough to cover its operating costs. Ever since, numerous attempts to reintroduce the service have come to nought. Many business models were studied - including one undertaken last year, by the provincial government authorities. At one time there were even investors from the Netherlands who were keen to get involved.
One thing that supporters can be sure of is that an entire decade of hard work has gone into the current business proposal, which is aimed at ensuring sustainability, along with all the tourism spin-offs that will come in the long run.
Read the latest here.
ARTICLE: PAULINE LOURENS, GEORGE HERALD JOURNALIST
'We bring you the latest George, Garden Route news'
Posted on: 08:00 Thu, 09 June 2016
Your Comments