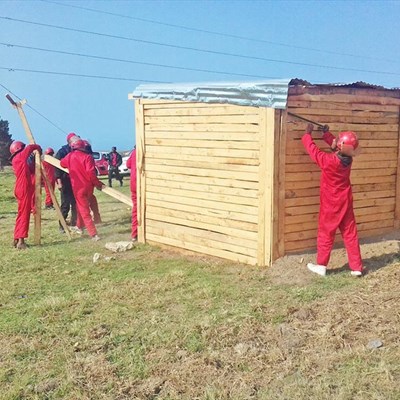 GEORGE NEWS - According to the George Municipality action is taken immediately once it becomes aware of a land invasion. This may well be, but it seems a pending land evasion is not met with the same sense of urgency.

Last week's housing riots could in all likelihood have been prevented if the municipality and the Provincial Department of Human Settlements had only heeded the age old saying, 'prevention is better than cure'.

The George Herald notified the municipality on 17 August that people were staking their claims on land in Silver Town, Thembalethu, but no action was taken to prevent the erection of the dwellings that soon followed.

The municipality was also furnished with photographs of the land dotted with corner poles - a clear sign of a planned land invasion.

Slow response
Five days later, on 22 August, the municipality responded as follows: "George Municipality in conjunction with the land owner is currently taking the necessary steps to address the matter within the parameters of the applicable legislation. The land in question belongs to the Provincial Government. The future use of the land is still under discussion."

The demolitions were carried out 19 days later on Tuesday 12 September and Thembalethu immediately erupted in violence. Two days later, upon his return from Cape Town on Thursday

14 September, George Mayor Melvin Naik distanced the municipality from the demolition of the 87 structures, saying council did not support the demolitions as "discussions had been held as recently as 14 August with the affected illegal land occupiers in an attempt to peacefully resolve this issue. 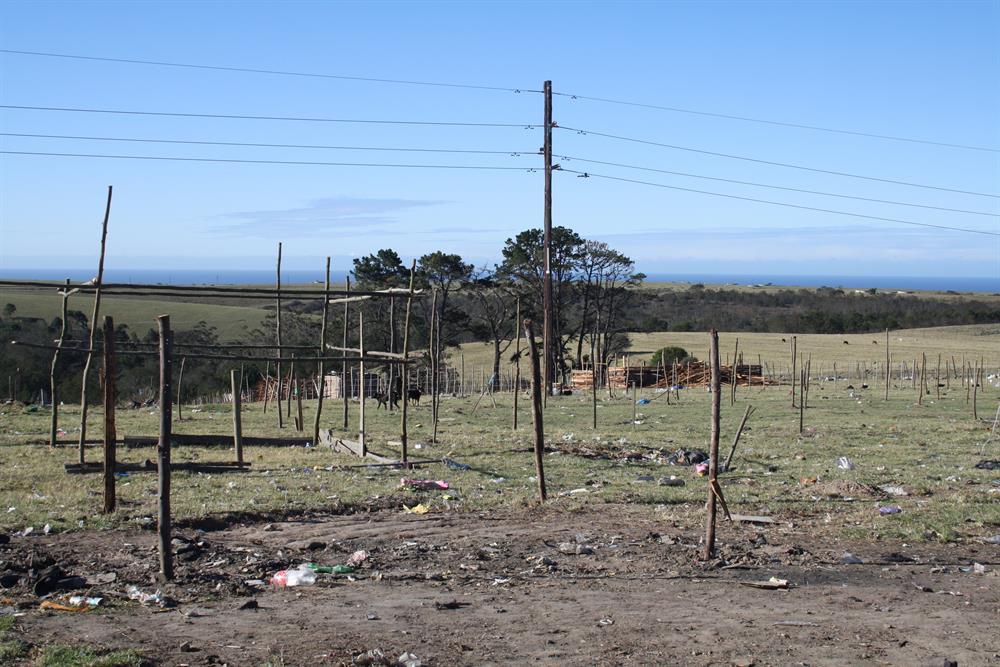 17 August: Land invaders had staked their claims, but had not started building their homes. Photo: Ilse Schoonraad

"However, the Municipality and Council notes that the Western Cape Department of Human Settlements has the right to remove illegal squatters from their property," he said.

But, by the municipality's own admission in its e-mail of 22 August to the George Herald, the 14 August discussions refer to a feedback meeting with residents of Zone 8 who have been living in illegal structures on another piece of land for months.

These squatters turn violent each time as they face eviction and the municipality is now considering providing them with basic services.

Asked about the delayed action, the MEC of Human Settlements, Bonginkosi Madikizela only said that his department acted as soon as it could and that they had to wait for an interdict before they could demolish the dwellings.

Action needed
The Chairperson of the ANC in George, Langa Langa says he lays the responsibility for the riots at the door of the municipality.

"I am sure they knew about the squatters' plans even before George Herald let them know. The people have spent time, effort and lots of money to erect these homes. As the agent of Province, the municipality should have acted before the building started. If they had spoken to the people then, the unrest could have been avoided."

Langa says the municipality has also created a precedent by giving in to illegal squatters in the past.

"Because people who broke the law by erecting homes illegally were indulged, many other people in Thembalethu now think that's the way to go. The correct processes and procedures should be followed to ensure that houses are allotted in a fair manner.

"If you break the law you should face the consequences. Nobody should jump the queue. Stick to the waiting list - first come first served."

"The looting and burning is putting services in Thembalethu back many years. It is also wrong to prevent people from going to school or work."

Q: On 17 August I sent photographs and a request for information about the planned erection of illegal dwellings on the land in Asazani next to the cemetery. Almost a month later, the Red Ants demolished the dwellings that have subsequently been erected. At All Brick (zone 8) people have been allowed to form an informal neighbourhood and I have heard from the community they are getting services. What exactly does the George Municipality do when receiving news of illegal structures being erected in Thembalethu?

A: The George Municipality has entered into an agreement with the Provincial Department of Human Settlements to monitor all of their land and Province has provided funding to appoint a Land Management officer to fulfill this function. When the Municipality becomes aware of any land invasion, the Municipal Department Informal Housing responds by visiting the land being invaded. The illegal occupants of the land are given a verbal notice to demolish the structures. If the structures are not demolished, officials of the informal housing department will demolish all unoccupied and half built structures. In the event where there is no interdict on the particular portion/s of land, an urgent interdict must be obtained. The interdict must be read to the illegal occupants and notices must be distributed to inform of any action to demolish in terms of the interdict.

Q: How long does it take the municipality to react and what exactly does this action entail?

A: Once the Municipality becomes aware of a land invasion, action is taken immediately to contain the situation.

Q: Which department/s is taking charge of illegal occupation? Who (which official) takes charge? Who is accountable?

Q: Who are currently getting houses and how have they been chosen?

A: Only persons who meet all the requirements to qualify for a subsidy will receive houses.

According to www.westerncape.gov.za you qualify for a housing subsidy if all of the following statements apply to you:
You must have been on the municipal housing demand database for a minimum period of 10 years. (Proof of registration required.)
Priority will be given to applicants over the age of 40 years and / or with special needs.
You are married or living with a long-term partner / or you are single or divorced with others who rely on your income.
You are a South African citizen or you have a permanent resident's permit.
You are over 18 years of age or if under 18, married or divorced with others who rely on your income.
Your monthly household income before deductions is less than R3 500.
You or your partner have never received a subsidy from the government.
You or your partner have never owned property.
You and your family will live on the property bought with the subsidy.
If you answer "yes" to all these questions, then you are probably eligible for a housing subsidy. Single people without financial dependants – such as the senior citizens, disabled people, etc. can also apply.

Q: What are being done about the so-called back yard dwellers? It seems that because they are living on formal plots they do not pose a problem to the municipality and therefore their needs are not being addressed. Are only the informal settlements being formalised through the housing project? I know of quite a few instances where backyard dwellers have occupied land in an attempt to get housing. The message seem to be: stay legally and you get nothing; squat and you get a house.

A: The issue of backyarders is a critical issue. In terms of the provision of housing for backyarders, there is no separate project which will only accommodate backyarders. All future housing projects will accommodate beneficiaries registered on the Municipal Housing Demand database. A backyarder survey was conducted to determine the level of services backyarders have access to. Funding has been requested from the DoHS to embark on a pilot project to provide 100 vulnerable backyard beneficiaries with basic services.

Q: Why are areas like All Brick allowed to develop? Surely by not addressing the occupation immediately, the problems and cost implications escalate.

A: The area All Brick is not being developed. The George Municipality on learning of the land invasion, attempted to demolish structures. All planned operations failed due to the volatility and threats from the illegal occupants in the area. The Informal Housing Section is not allowed to enter this area alone as the inhabitants threaten to injure municipal personnel and destroy vehicles, hence operations are arranged with the police, sheriff and the Public Order Police to accompany them during such an operation.

Q: Is the housing problem getting out of hand? If so, would it not be better for the municipality to play open cards with the people than to constantly give them hope while knowing that the person or family will not be provided with formal housing?

A: The housing problem is a general problem country wide and not just in George. The Provincial Department of Human Settlements makes funding available for housing delivery within a financial year. Land and funding for housing delivery is very limited and the Municipality relies on annual funding from the National and Provincial Government with regard to the provision of housing. It is important to note that the municipality may not use any funds collected from taxpayers to provide housing. (According to the Constitution Schedule 4 Part "A" Housing is not a municipal function.) The municipality is currently providing the housing function on an agency basis to government.
The afore-mentioned is corresponded to all communities during the IDP meetings.

Q: How many people are on the housing waiting list?

Q: How is the housing projects in Thembalethu progressing and what is in the pipeline for the future? Please provide detailed housing figures and deadlines.

A: The Thembalethu UISP housing project is underway which will provide a total of 700 houses in the first phase of the project. A total of 41 houses have been handed over and 109 houses are in the construction process.

Q: How much is available for housing in the 2017/18 budget and how much is being set aside for the next 10 years?

A: The Division of Revenue Act (DoRA) allocation for the 2017/18 financial year is R65 800 000. The DORA allocation is made available for 4 years and the Municipality is not aware of what the DORA allocations will be for the following 10 years hence the information cannot be provided.

Q: What steps are being taken to prevent illegal land occupation?

Q: Are the approximately 600 informal dwellings in zone 8 (All Brick) getting services? If yes, when?

A: When the Municipality became aware of the land invasion at All Brick, 4 attempts were made to demolish the structures by the Municipality as well as the Sheriff and the Public order Police. The community then embarked on protest action which led the Mayor to intervene and meet with the aggrieved community. Negotiations are underway together with the land invaders to determine how and to what extent basic services can be provided. The consulting engineer has been requested to design a layout for the provision of services in terms of the national norm. Once the design has been completed, reblocking will have to take place before services can be provided. In terms of the Constitution, the municipality is obliged to provide basic services to inhabitants in George. This is not the norm when an illegal invasion takes place, but due to the fact that the inhabitants have moved into structures, the Municipality will have to apply for an eviction order to remove the illegal dwellers which will have financial implications for the organisation.

Q: Does the municipality have an emergency housing policy in place?

A: An emergency housing policy will serve at the next Human Settlements Committee. This policy centres around the criteria for the provision of emergency structures in emergency situations e.g. fire, storm etc. but does not cover land invasion.