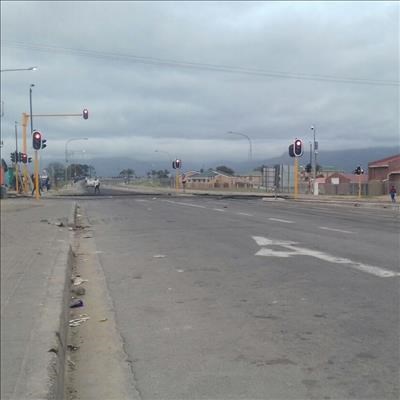 Most streets in Thembalethu are deserted as motorists are avoiding the area.

GEORGE NEWS - Women seem to make up a large number of the protestors in Thembalethu who are livid after Red Ants were sent into Thembalethu yesterday to demolish their newly built illegal dwellings in Asazani at the back of the township.

Southern Cape police spokesperson, Malcolm Pojie has confirmed that of the six people arrested since the rioting started yesterday at noon, five are women.

Pojie says the situation remains volatile and that police are closely monitoring the area. “Several buildings have been damaged but the police managed to prevent the protestors from setting most of the buildings alight. Buildings at the Multi Purpose centre were damaged with stones and all the windows of the old municipal building in Thembalethu has been broken.”

Journalist Zolani Sinxo reports that the youth centre currently under construction has also been severely damaged. This is a huge knock for the youth as the centre is part of the UCT in Eden project that aims to instil a love of maths and science in high school learners in Thembalethu ensuring that youngsters from Thembalethu are accepted for related courses at UCT. The centre was due for completion at the end of the month.

The new medical clinic, also still under construction, has been damaged and windows broken. Reports were received that the community hall in Asazani where the demolitions took place has been set alight, but that the fire services manage to contain the blaze. The extent of the damage is unknown.

Sinxo reports that the violence has abated, but that the Public Order Police (POP) and other law enforcement officials are on the scene as small groups continue to riot. “All schools, except Thembalethu Primary, have been closed. The media representatives on the ground are also being targeted and we have to be very careful to avoid attacks.”

Motorists are advised to avoid the area until things have calmed down.