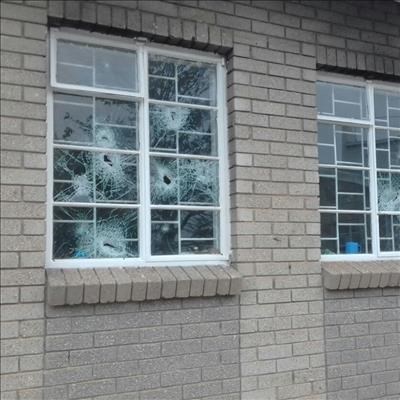 A building in Thembalethu damaged during the riots.

GEORGE NEWS - Four people, three women and a man, have been arrested by the police in Thembalethu since the unrest that erupted yesterday afternoon following the demolition of shacks in Asazani next to the cemetery at the back of the township.

Polive have used stun grenades and rubber bullets to control the crowds.

Thembalethu resembles a ghost town as protestors, who have been burning tyres and pelting stones at vehicles on the N2 from the Themabelthu offramp since 02:00 this morning, are also blocking the roads and preventing anybody from exiting or entering the area.

A heavy police presence is being maintained in the township, but it is very difficult to say how many people are taking part in the protest action as tiny pockets of rioters roam the township and violence is sporadic and move from hot spot to hot spot.

The stretch of N2 from the Garden Route Mall to the Pacaltsdorp offramp is in the process of being reopened.

Rumours that a police officer has been injured, could not be confirmed.

Zolani Sinxo of George Herald and Idinga is on the scene and will send regular updates.