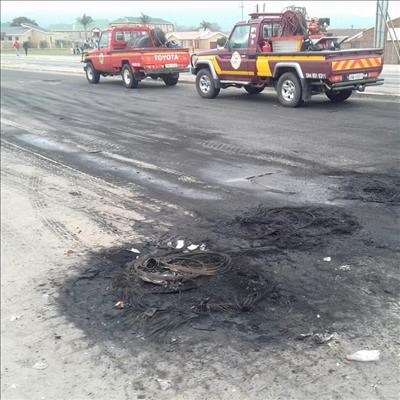 This photo was taken in Thembalethu earlier today by Zolani Sinxo.

GEORGE NEWS - The N2 has been reopened to traffic after police cleared burning tyres, tree trunks and broken road signs from the freeway. Earlier protestors were pelting passing cars with stones and any debris and rubble they could lay their hands on. A heavy police presence is being maintained and the highway as well as the Thembalethu bridge and pedestrian bridge are being monitored.The entrance to Thembalethu remains closed as unrest continues in the area.

Protest marchThe riots in Thembalethu has led to the cancellation of another unrelated protest march in town. Organisers of the legal protest march from Conville to the George Municipality scheduled for today, have put the march on ice and are instead addressing the would be marchers at the Conville Community Centre. The convener of the march, Cornelius Esau, said they decided to restrict their protest action to the community hall after consultation with the police and traffic officials. “We do not want to endanger the lives of the marchers in an already volatile situation. Deputy Mayor Gerrit Pretorius will join as at the hall to receive our memorandum of grievances.” Esau and his supporters are airing their unhappiness over unemployment and poverty, as well as certain aspects of GO GEORGE. Pretorius is expected at the Conville Community Hall at 10:30. Journalist Kristy Kolberg will be there.