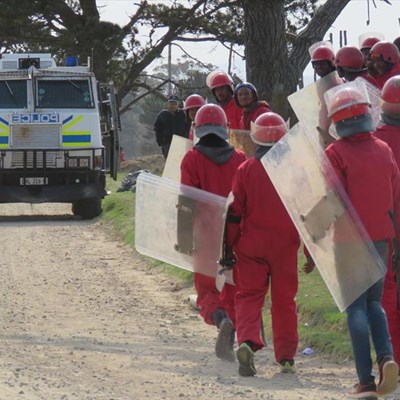 The Red Ants move in to demolish the structures.

GEORGE NEWS and VIDEO - Violence brought Thembalethu to a standstill for the second time this year following the demolition of newly built illegal informal structures in the area.

Nearly ninety would-be and completed homes at the back of Silver Town were broken down by contracted Red Ants on Tuesday morning 12 September.

According to the Western Cape Provincial Department of Human Settlements, the Red Ants were executing a court interdict to remove the 87 structures.

About 100 community members gathered at the site and watched helplessly as the Red Ants accompanied by the Public Order Police (Pop) demolished the dwellings. According to a statement released by the department, notices were distributed before the demolition.

"The department obtained an interdict to demolish the illegal structures and notices were put up, hence the demolition. The structures were built in portions 197, 51 and 52, which the department is planning to develop for mixed use."

The land in question belongs to Province.

After the Red Ants finished and drove off with the confiscated building material loaded on trucks, stones started to fly. Journalists on the scene had to flee as residents turned on them. 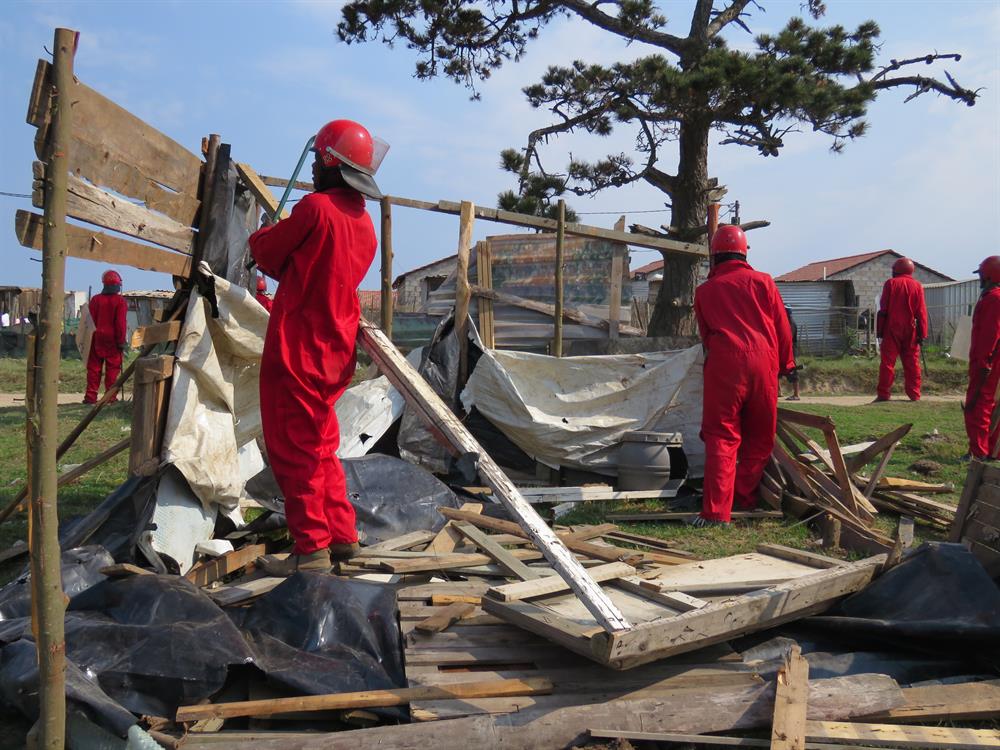 Red Ants worked as fast as they could to demolishing the illegal structures. Bongani Catha is one of the residents whose structure was demolished.

An SABC vehicle was damaged and almost torched with the reporters inside, but managed to make a quick getaway.

George Herald journalist and Idinga editor, Zolani Sinxo, on a scooter, had to flee for his life. FrustrationBongani Catha, one of the residents whose structure was demolished, said they built there because as backyard dwellers they are frustrated by the slow pace at which government moves to provide housing.

"We don't have land and most of us are renting. Those who stay for free, live in the backyards of relatives. We met with the municipality and the provincial government and we came to an agreement that our structures won't be demolished and that no violence will break out.

"However, what we saw today was a complete opposite of our agreement. This shows they don't have humanity; they are looking for war and if it's war they want, war is what they will get.

"However, we will continue to engage with them and the residents will give us a way forward as to what we are going to do after this," said Catha. Residents gathered to protest against the demolition of their structures.

ViolenceProtests continued through out the afternoon, and escalated in the early hours of Wednesday morning. Many buildings were damaged and vandalised, including a new science youth centre that was set to be opened at the end of the month.

Many attempts to set buildings alight was stopped by the police.

The N2 was closed until just before 10:00 on Wednesday morning as protesters burnt tyres on the freeway and blocked the lanes with road signs and tree trunks. Vehicles were also pelted with stones.

At the time of going to press at about 14:30 on Wednesday, six people, one man and five women, had been arrested and motorists were still advised to not enter or leave Thembalethu after access to the area was blocked shortly after 02:00 at night.

Several fires were still burning in the area and a heavy police presence was being maintained.

Exams were disrupted as schools were closed and people could not get to work. In a horrific turn of events, a dog was found burnt in what looked like a necklacing. It could not be established if the dog was already dead when it was set alight, however a resident commented that the dead dog was seen lying next to the road the day before. Another dog was run over. 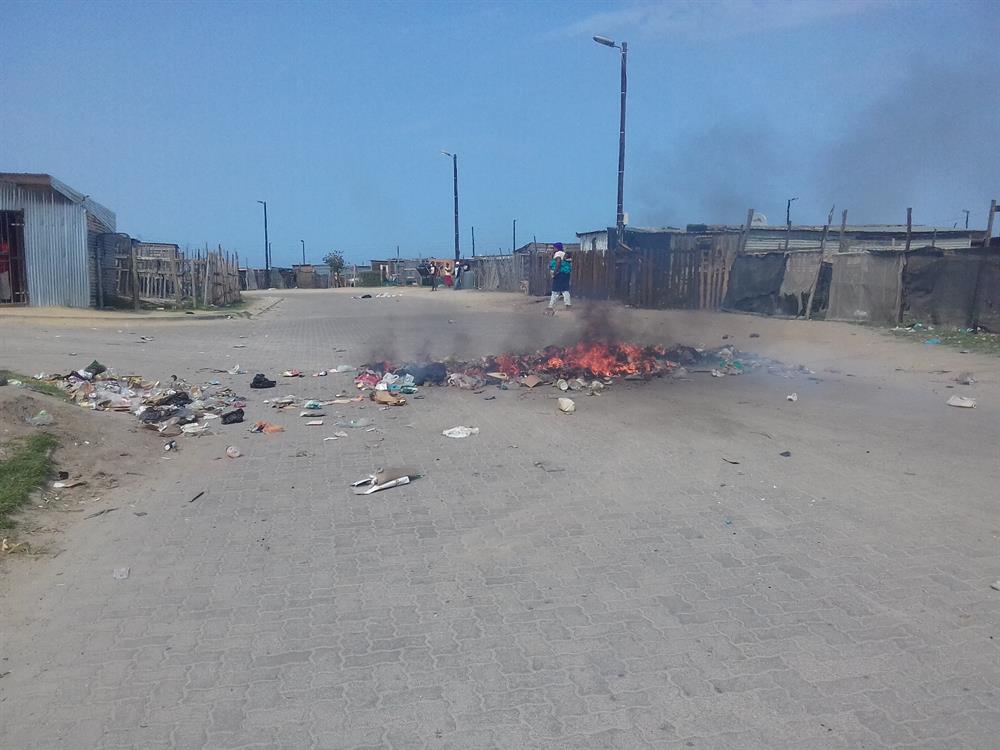 Rioters burnt anything they could find in the roads.

Housing phase twoThe department said over 4 000 housing opportunities will be delivered in the area under the Upgrading of Informal Settlements Programme (UISP). The first phase of the project, which consists of 1 750 housing opportunities, has been completed and beneficiaries have taken occupation of the houses.

The department said it is now working on the second phase and the invaded area forms part of the development footprint. The department therefore had to act on the illegal invasion, as it would have an adverse impact on the implementation of the subsequent phases.

Head of Human Settlements Implementation in the Department, Phila Mayisela, said the invasion of land will delay housing projects and affect many beneficiaries who have been waiting patiently for houses. An SABC vehicle was damaged by angry residents.

"We cannot allow a handful of people to delay a project that will benefit thousands of families in this housing project. If people are not happy about anything related to our housing allocation, they are always welcome to talk to us," said Mayisela.

Violent housing-related protests also took place in Thembalethu on Wednesday 12 July. During this protest, several vehicles were damaged in stone-throwing incidents, and three were set alight.