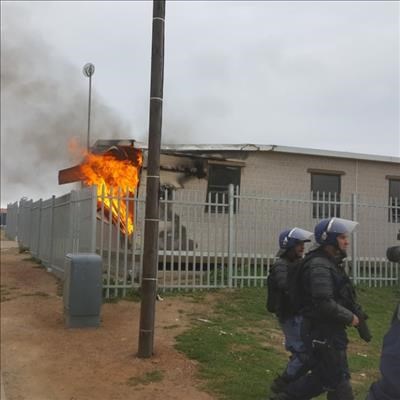 Yesterday several buildings and vehicles suffered great damage when they were stoned and vandalised while others were set alight.

GEORGE NEWS - The situation in Thembalethu remains volatile as two more vehicles were set alight early this morning following the torching of two trucks, a construction site container used as an office and a building yesterday.

The township has suffered days of housing related protests after the Red Ants were sent in on Tuesday to demolish 87 newly built illegal dwellings on provincial land in Silver Town.

At the moment the situation seems to have calmed down, but police are maintaining a heavy presence in the area.

Community leaders met earlier today in an effort to resolve the matter peacefully.

Captain Malcolm Pojie, the Southern Cape police Spokesperson said, there had been sporadic incidents earlier today and that their members are monitoring the situation.

There has also been reports of tyres being burnt on several roads. Clean-up operations in the area has not yet started.

ArrestsUp to date 13 people have been arrested for public violence and malicious damage to property. On Tuesday four people were arrested with only one being charged. Yesterday (Wednesday 13 September) 12 people were taken into custody.

Yesterday several buildings and vehicles suffered great damage when they were stoned and vandalised while others were set alight.

Chantel Edwards-Klose, Spokesperson for the George Municipality, said the Thembalethu bridge is open for traffic. “Reports are that the situation remains volatile and the public is requested to refrain from entering this area. Public Order Police (Pop) is in control of the situation and any further comment required must please be obtained from SAPS Spokesperson, Malcolm Pojie.”

Read a related article: Municipality "does not support" demolitions"