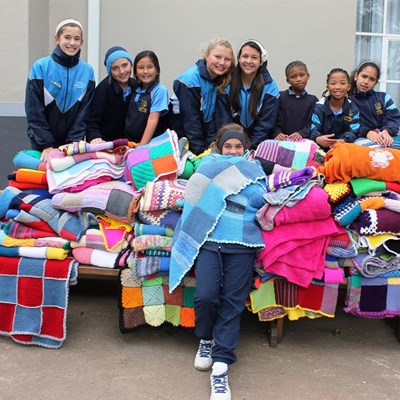 The Keep Hoekwil Warm Project received a whopping 200 blankets. In front is Landon Crowther and at the back are school prefects Kailey Cronjé (far left), Danel Mulder and Chanté Le Roux (in the middle), who were also involved in the project, with some of the younger Hoekwil Primary School pupils. Photo: Henrica Veldman
GEORGE NEWS - Landon Crowther (13), the head girl of Hoekwil Primary School, was acknowledged by the Seven Passes Initiative for initiating the Keep Hoekwil Warm project.
According to Wilmi Dippenaar, of the Seven Passes Initiative, a non-governmental organisation in Touwsranten, they have decided to thank Landon on behalf of the community for starting the project by awarding her with a merit award.
"To hand out so many blankets is a phenomenal performance that needs acknowledgement," said Wilmi.
The Keep Hoekwil Warm project, aimed at keeping the needy of Hoekwil warm during the cold winter days, was started in March by Landon with the help of fellow prefects to encourage a community knitting initiative.
Landon only aimed to collect 20 blankets, but nearing the end of June a total of 200 blankets was received. These were handed out to the disadvantaged within the broader Hoekwil community.
Landon is delighted about the award and thanked everyone who helped make the project such a huge success.
Read related articles here:
Hoekwil Primary head girl Landon Crowther (left) receives a merit award from Naizel Buys, secretary of the Seven Passes Initiative council, for her work in the community during the Keep Hoekwil Warm project.
ARTICLE AND PHOTOS: HENRICA VELDMAN, GEORGE HERALD - JOURNALIST.
'We bring you the latest George, Garden Route news'
Posted on: 12:00 Fri, 24 July 2015
Your Comments