SARS move upsets many in CBD 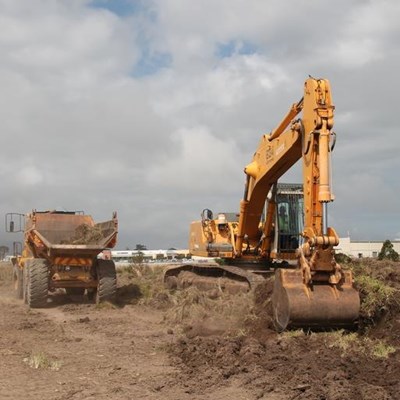 The ground work and excavation activities for the new SARS building near the Garden Route Mall started last Monday 11 January.
GEORGE NEWS - Last week's disclosure that the South African Revenue Services (SARS) George office will be moving to a site close to the Garden Route Mall, has many people in town talking.
The process to award the tender took approximately three years due to upheavals in the top structure at the SARS head office in Pretoria. In the end Rainbow Place Properties 29 (PTY) Ltd won the day.
Leon Dorfling, owner of the old Volkswagen Tavcor building in York Street, confirmed that he initially tendered for the SARS contract, but never put in a tender for the final tender request.
"After a three-year period that was characterised by on-off indecisive communications from the SARS head office, I had rented out a section of the building and had to honour the lease. It is another nail in the coffin for the CBD.
What is council doing to protect its tax base in the CBD?" Greg Young, owner of Fairview Business Park in Courtenay Street, said he also initially tendered twice for the SARS office space tender, but never continued with the final tender.
Bidders eliminated
Fanie van Niekerk, manager of the Harry Mann Square building in York Street, one of the five original bidders that was eliminated from the process as they did not see the 're-registration to bid' notice in the press, said the move is detrimental for the CBD.
"It's unfair to the residents and businesses that have to make use of the services of SARS as now they will have to travel to an outlying regional shopping mall.
"The elderly will be out of their comfort zone and will have to pay extra for a family member or friend to accompany them to the mall. I am shocked that such an insensitive decision can be made by a government department that has performed very well in the past."
CBD fine in long term
Andre Fourie Jr of Andre Fourie Properties believes that from the very start of the tender process it was a foregone conclusion that SARS would be moving east. "The George CBD is strong and will not suffer in the long term. There is a steady stream of potential tenants knocking at our door."
GO GEORGE
In response to questions regarding the distance the mall is from the CBD, Lood Steyn, a director of Rainbow Place Properties 29 (PTY) Ltd, the successful bidder, said, "The GO GEORGE bus service travels to the mall.
Furthermore, at the time of developing the Garden Route Mall there was a prerequisite by Sanral that Thembalethu must be linked to the mall with a footpath under the N2.
"This will now have to happen."
Steyn feels that some of the criticism is uncalled for. "Some of the original tenderers seem to have missed the tender notice in The Sunday Times of 8 November 2015. We saw it."
The 2 200m² ground floor development will cost R35-million and SARS is expected to take occupation on 1 June.
In line with government property contracts, it is a five-year period with an option to renew.
In 2013 York Park, the glass building in York Street commonly known as the SARS building, was bought by the Western Cape Department of Transport and Public Works for R84-million.
At the time Robin Carlisle, the former MEC for the department, explained that the building was purchased as part of the provincial government's policy of owning rather than leasing property. Siphesihle Dube, media spokesperson at the Western Cape Department of Transport and Public Works, added, "We are expecting to consolidate and relocate all our provincial offices under one roof in George at York Park over the next three years."
Mayor keeps mum
Asked for comment on SARS's move to the mall, the office of George Mayor Charles Standers replied, "We have no comment at this stage."
Read a related article: Top George businessman questions move
Click here for a previous news flash.

Concerned George resident Monica Vaccaro says the SARS move is sad, but inevitable. "This could be the final acid test for the CBD." Photo: Myron Rabinowitz
ARTICLE AND PHOTOS: MYRON RABINOWITZ, GEORGE HERALD JOURNALIST
'We bring you the latest George, Garden Route news'
Posted on: 06:00 Thu, 21 January 2016
Your Comments