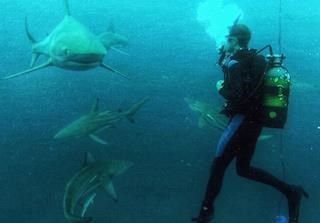 NATIONAL NEWS - In Mossel Bay, there is a population of Great White Sharks which tourists and enthusiasts travel from all around the world to come and see.
The number of sharks here in the bay can vary, depending on the season.
In the winter months, there are large numbers of sharks around, as it's during this time of year that the activity on Seal Island (1km from Diaz beach) is at its highest.
Blackgill is a 3.8 meter female Great White Shark. At 3.8m, she is one of the largest sharks we have here in Mossel Bay. That may sound big, but in fact, this shark is still a juvenile. A female White Shark won't reach sexual maturity until around 4.5m.
She is a very special shark. When she is around our boat, it can be a very spectacular show. Whether it is simply a hunting technique she prefers, or her personality is slightly more outgoing, Blackgill can make several out of water lunges towards our bait tuna head.
Read the full article on our sister publication, Mossel Bay Advertiser.