Hawthorndene up for auction again 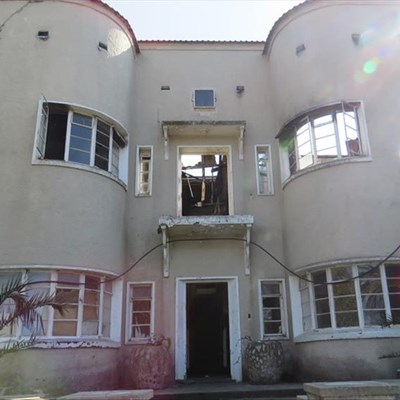 The decaying Hawthorndene Hotel and its annexures are to be auctioned off. The Art Deco style building's corrugated iron roof is in tatters. Photo: Pauline Lourens

GEORGE NEWS - Heatherlands residents who have been waiting for a change in fortune of the Old Hawthorndene Hotel will hold their breath on Friday 29 September when the hotel, its annexures and 10 000m² of prime property goes under the auction hammer.

The municipal valuation for the property is a mere R2,6-million.

The sale was instructed by Mazars and KPMG, the joint liquidators of Natserve Developments (Pty) Ltd and Pluscor Six (Pty) Ltd, and will be held by Van Rensburg Auctions at their premises in Tamsui.

The controversial property has been a bone of contention for residents in Heatherlands as it attracted drug addicts who are thought to have caused a fire on 2 July 2016, resulting in extensive damage to the roof and walls.

DrawcardThe extensive land with 2 600m² of buildings is undoubtedly a huge drawcard, as George has few undeveloped areas available and an ever-increasing demand for more homes due to a constant influx of new residents. The property is zoned as residential. Heatherlands residents are hoping that when the auction hammer falls on Friday 29 September, the bad luck spell will lift, unsavoury characters disappear, and all troubles that have been plaguing this property will be resolved.

ComplicatedThe George Municipality, who was asked last year to intervene and help facilitate the sale, reported that the would-be buyer would have to be willing to go the complicated route of cancelling the sectional title schemes that govern the 32 units of the "Hawthorndene Country Inn"; subdivide the property to obtain development rights and resolve intricate boundary issues.

The liquidators appointed at the beginning of this year - Mazars and KPMG - appointed Van Rensburgs Auctions to facilitate the sale along with Leonard Katz, a director with EnsAfrica, a company specialising in insolvency, business rescue and debt recovery.

There are families living on the property illegally that would have to be evicted.

ArrearsIn last year's report it was mentioned that the municipal bill at the end of December 2016 was in arrears to the tune of R3 711 303,18. Previous bids were made by George hotelier Les Dyason in 2013 and British buyer Abdul Parker in October 2016, both of who made substantial deposits to the former liquidator Mohamed Patel. Patel reportedly disappeared with the deposits and was at one time seen in Dubai.

It was then that the new liquidators (KMPG and Mazars) were appointed.

AuctionThe auction is scheduled to take place at the premises of the auctioneers in the Van Rensburgs Auction Rooms, Saffer Crescent, Tamsui Industria, George at 10:00.

It is likely to attract prominent bargain hunters who have been snapping up George's hotels out of liquidation and turning them around to fill the niche in the market for packaged bus tours.

Due to the size of the property, people in the medical field are speculating whether it would be a suitable place for a hospital. The townhouses could be turned into consulting rooms.

It is therefore in the interest of George for the transaction to be successful this time.

It is crucial that the George Municipality help resolve and facilitate the legal boundary and rezoning issues speedily, for the buyer would obviously want a return on investment within a reasonable time. So said the principal of Seeff, Pieter Jordaan, who was asked for an opinion on what effect a successful sale could have on the value of real estate in the northern suburbs.

"The municipality should therefore also be willing to write off some of the outstanding debt," he said. "Failing to do so will risk having the property fall into a slum, with associated safety risks. It is in the interest of the community that role players find a workable solution."