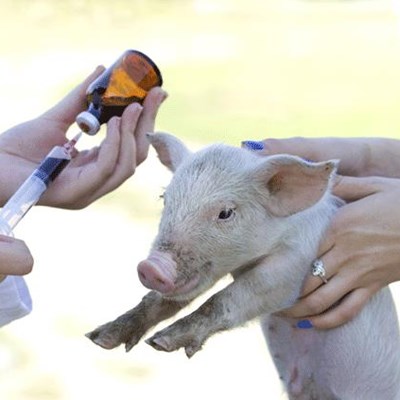 Generic image
AGRICULTURAL NEWS - The European Union is increasingly coming down hard on indiscriminate use of antibiotics in livestock production, posing many challenges for farmers.

Speaking at EuroTier 2014 in Germany, Dr Hans-Joachim Götz, president of the German Federal Association of Practising Veterinary Surgeons, outlined a new systematic approach to the problem.

The use of antibiotics in commercial livestock production, antibiotic resistance, and how to implement an effective antibiotics monitoring system, are currently important concerns for veterinary surgeons in Europe. This is due to the risks posed by antibiotic-resistant germs to human health. To highlight the seriousness of the situation, Germany will be placing the subject of antimicrobial resistance at the centre of the G7 Presidency Summit that it is due to host in June 2015.

Skewed perceptions
Whereas research continues into whether antibiotic-resistant bacteria can be passed to humans from animals, politicians and the general public already believe that antibiotics are overused in livestock production, and that this leads to antibiotic-resistant bacteria in humans. Veterinary medicine is blamed for the development of this resistance, due to its presumed excessive and nonspecific use of antibiotics.

This is despite the fact that the disturbing level of antibiotic resistance in humans is the direct consequence of the high rate at which doctors have for years prescribed antibiotics to their patients. The selective pressure on anti-microbial resistance usually occurs at the point where the relevant antibiotics are used. The most important contributory factors, present in equal measure in both human and veterinary medicine, are:
What can be done about the problem?
If the German Federal Association of Practising Veterinary Surgeons (GFAPVS) had its way, vets and doctors would commit themselves to using antibiotics according to strictly specified guidelines. This would form part of the EU Commission’s Anti-Microbial Resistance (AMR) action plan and of the German Antibiotics Resistance Strategy (GARS).

The key to success, particularly in dealing with methicillin-resistant staphylococcus aureus and the transmission of other resistant bacteria, is to improve hospital hygiene. Equally, 21st century animal health policy must aim to curb diseases by means of preventative actions such as inoculations and improved hygiene measures, and by better farm management and improved housing conditions for animals.

If, despite all these preventative efforts, diseases still occur in livestock herds and flocks, the governing principle must be that sick animals are entitled to be treated with antibiotics or other remedies. Any other method cannot be reconciled with animal-welfare needs or with responsible animal husbandry methods.

Antibiotics, especially reserve antibiotics, should, however, only be employed after considering their therapeutic efficacy and after taking the possibility of antimicrobial resistance into account.

Progress through legislation
To achieve these aims, the 16th amendment to the German Medicines Law, which came into force in Germany earlier this year, created an antibiotics reduction concept that leads the way not only in Europe but worldwide. The GFAPVS has argued strongly for this amendment, because the new statutory provisions will, for the first time, allow farms and supervisory agencies to know the frequency with which antibiotic therapies are employed in each type of farming operation.

At the same time, livestock farmers will be able to use data, covering the entire country, to make comparative assessments of their own situation, while animal health authorities will be informed, via a risk alert, of farms where antibiotic-use monitoring measures need to be reviewed. The GFAPVS maintains that this is the correct approach to permanently reduce the use of antibiotics in livestock farming, in order to minimise the risk of the emergence and spread of antibiotic resistance. The concept has not yet been put into practice. Hopefully, it should be implemented at the beginning of 2015.

Successful existing measures
Even more significant is the comprehensive antibiotic monitoring currently being undertaken by Germany’s poultry and pig fattening industries. This is a quality-assurance system motivated for by the GFAPVS and the German Farmers’ Association, and was implemented long before any monitoring by government agencies. It now covers 95% of poultry farms and some 90% of pig-rearing operations.

This type of quality-assurance system provides farmers and vets with genuine benchmarking and the ability to ‘learn from the best’. The pressure from the added-value chain on major users of antibiotics will do the rest. This is another reason that the GFAPVS is convinced that it is important to introduce a Europe-wide system to monitor antibiotic use. The new version of the animal medicines law recently put forward by the European Commission should be improved to include this aspect.

Being realistic
However, Germany and the EU levels must under no circumstances try to outdo each other in setting overly ambitious antibiotic use reduction goals. Specialist expertise must be at the heart of any decisions about the sustained reduction in antibiotic use.
Animal health must be maintained or improved. This requires all therapy options to be retained, including the use of alternative medication or the use of reserve antibiotics. Only the results produced by an effective monitoring system will allow the use of antibiotics to be reduced without affecting animal welfare standards. This system could be reinforced and made permanent by legislation requiring mandatory veterinary monitoring of commercial livestock farmers.

(This presentation was translated from German.)