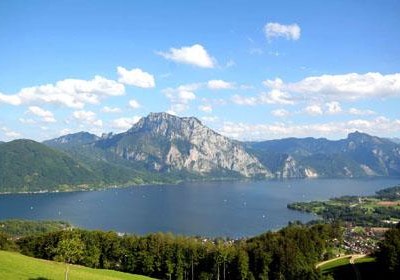 Traunsee lake in Austria.
INTERNATIONAL NEWS - Police in Austria appear to have a bizarre murder-suicide case on their hands.

Authorities believe a man killed a woman and then dismembered her before encasing her head in concrete. His body was found submerged in a lake.

The gruesome details began to unfold over the weekend when a suitcase with the woman's body parts was found in Traunsee lake, about 50 miles (80 kilometers) east of Salzburg, said prosecutor Birgit Ahamer. A police dog later found a second suitcase with more pieces of her body.

The man's body was found by divers in the lake on Monday. Attached to his hands with zip ties were two suitcases filled with rocks. The woman's head was discovered nearby.
Read more on CNN.