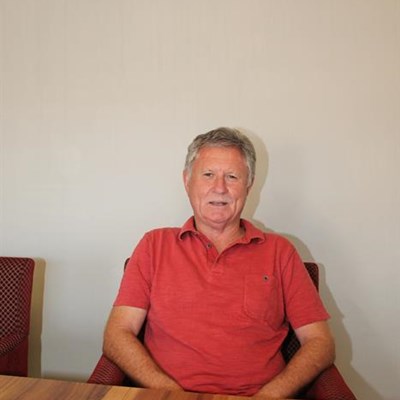 Louis van Rensburg. Photo: Myron Rabinowitz
GEORGE NEWS - Louis van Rensburg, businessman and former mayor of George, aired his views on the SARS George office moving close to the Garden Route Mall. "Although I manage properties in town, I never submitted a tender document for SARS office space. My comments are therefore purely as a taxpayer and I want to direct my questions to SARS," he says.
In lieu of the fact that SARS is the only national government department that shares in the income of every taxpaying citizen through taxes, Van Rensburg feels it would be appropriate to relocate to premises that are more suitable to the day-to-day activities of taxpayers.
"I was privy to the first SARS tender document and am almost sure that SARS required a site within 3km of the CBD and on a main arterial route. What has changed since 2013? The Garden Route Mall is 5,5km away from the business and administrative centre of George," says Van Rensburg.
SARS must be aware of the feet that visits its banking hall and that it can be time-consuming waiting in the queues, he says. "More than often when you get to the counter you are told that you need another document. This will result in more wasted costs and time. If you are using the services of a professional who charges by the hour, those costs will be passed on to the consumer. Has this been factored in to the decision to move the SARS office so far out of town?"
Van Rensburg further questions if any thought has been given to the fact that malls per se are overwhelming for the elderly. "Senior citizens will need help to navigate as the SARS offices is at the mall, but not in the mall. Exiting at another entrance can be a harrowing experience for people who are not used to this type of shopping centre.
"Hopefully someone from SARS will give the citizens of George a comprehensive list of reasons why they have moved a service department that affects such a large portion of the population 5,5km out of the centre of town," said Van Rensburg.
A request for comment has been sent to SARS and hopefully George Herald will receive an answer in time for publication next week.
Read a related article here: Sars move upsets many in CBD
ARTICLE AND PHOTO: MYRON RABINOWITZ, GEORGE HERALD-JOURNALIST
'We bring you the latest George, Garden Route news'