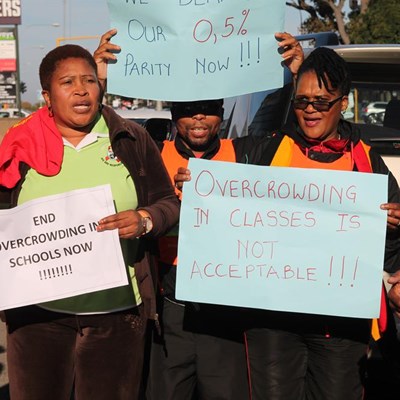 The message from teachers across the Southern Cape is clear: "End overcrowding in schools now." Photos: Myron Rabinowitz
GEORGE NEWS - With close to 60 Grade 1s in a class, it takes about 10 minutes for a teacher to restore order after having stepped out of the class.
Southern Cape Regional Secretary of the South African Democratic Teachers Union (SADTU), Simpiwe Mbalo, who organised the picket in front of the education department's office in Courtenay Street, told George Mini: "In Thembalethu we don't have classrooms, we have teaching halls."
Mbalo, who organised the SADTU picket by 25 teachers on Wednesday 11 May, said: "This is not a protest, but a picket to bring the problem of overcrowding in our classrooms to the attention of the authorities. The norm as per the Western Cape Education Department (WCED) is a teacher to pupil ratio of one to 35, but in the Thembalethu primary schools the ratio is one to 55.
"In our assessment the majority of schools in the poorer areas only hand out the pupils' school reports at the beginning of the next term, because the teachers simply can't finish all the marking and administration before the close of term."
He said this hampers teaching which leads to poor performance by pupils and impacts on the teachers as well.
"Effective teaching simply can't take place in such an overcrowded class," said Mbalo. In December last year WCED Director of Communication, Paddy Attwell, confirmed that a site for another high school in Thembalethu has been identified and forms part of the department's three-year Medium Term Expenditure Framework (MTEF) planning.
"The WCED is also planning a new primary school for the broader Thembalethu area, depending on whether the department can secure a suitable site. The Department is considering the possibility of a new high school in Pacaltsdorp as well and the refurbishing of George High School," Attwell said.
Simpiwe Mbalo Regional Secretary of Sadtu in the Southern Cape says effective teaching in overcrowded classrooms is impossible.
ARTICLE & PHOTOS: MYRON RABINOWITZ, GEORGE HERALD JOURNALIST
'We bring you the latest George, Garden Route news'