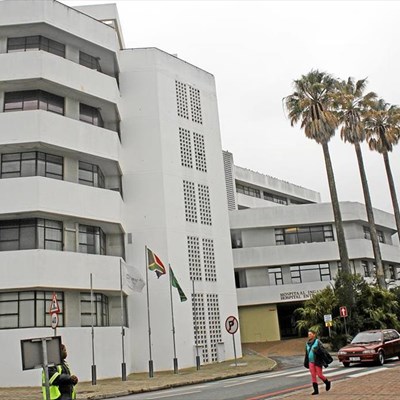 The Mediclinic has to move from the town centre where there is no space for expansion. Photo: Alida de Beer

GEORGE NEWS - The failed appeal of the Mediclinic development application sparked some response from Georgians and raised questions that are being asked by Lizel van der Westhuizen in the letters page in this week's issue.

The matter also came up in a discussion at a business breakfast on Friday 29 September where the speaker was Jannie Durand from Remgro, owner of an almost 50% stake in Mediclinic International.

It was made clear that Mediclinic George is pressed for time to build their new R700-million hospital with the current facilities fast becoming too small for a growing demand for health services.

Two years after they had hoped to secure approval, they are starting afresh with a new application.

As reported in the George Herald last week, the municipality's motivation for its decision to reject the appeal was that the proposed development (which would require an amendment to the urban edge) is "inconsistent" with the George Spatial Development Framework (SDF) and with the "broader spatial planning principles" of the applicable legislation.

It has come to light that Rainbow Place Properties, developers of Eden Meander Lifestyle Centre, applied for an interdict to prevent the municipality from hearing the appeal of Magnolia Ridge Properties, owners of the land where Mediclinic envision their new hospital.

Rainbow Place stated in their application that it "... would prefer for Mediclinic to utilise its (Rainbow's) land for the development of the private hospital.

Rainbow Place was granted the required rights for the development of a private hospital prior to Magnolia's planning application proving to be unsuccessful.

In fact, Rainbow Place is the only land owner with the required land-use rights in the vicinity where Mediclinic intends developing the private hospital."

The interdict application was dismissed with costs.

'Take hands'
Expressing concern over the drawn-out struggle for development approval, Louwrens Selzer from Garden Route Development, a group that encourages big businesses to invest in the Garden Route, said that extensive residential development is taking place in George, and job opportunities, facilities and services have to keep up with the influx of people who occupy these new houses.

"The fact that a fast growing town like George cannot finalise a decision on a development of this magnitude by an international company, reflects poorly on the town.

"Bureaucratic red tape and a tug of war among developers over whose land should be used, should not be allowed to delay a much-needed new hospital.

"In Stellenbosch, the local authority and private sector took hands with the Mediclinic to facilitate the development of its new hospital there.

The role of the local authority is vital in creating an environment that encourages economic growth."

Sac Cllr Bazil Petrus said it is urgent that the matter be finalised.

"It is clear that George has a huge demand to develop a new hospital because of the growth rate of the city. I feel the urban edge is not cast in stone and can indeed be moved for something like a hospital, if it is in the absolute interest of the community.

The land owner invested in George with the aim to develop, and nobody told him that his land would be cut out of the urban edge.

This is what kills business.

This development will not only provide a health service for George, but the whole of the Southern Cape and even the country, if certain specialisations like a cardiac unit are introduced.

The municipality has to consider affordability and service provision, but if everyone is serious about building the hospital, the municipality and applicant should perhaps try to find a midway by amending part of the proposal so that it is acceptable for both."

He said council is currently willing to sell land which falls outside the urban edge for educational purposes (near Kingswood).

"Are they going to tell the developers about the urban edge after they have sold the land?

"There are also people who own property, but cannot develop it because of the urban edge. Let us look at the merits of development proposals objectively."

Read a related article: Why new Mediclinic location was rejected