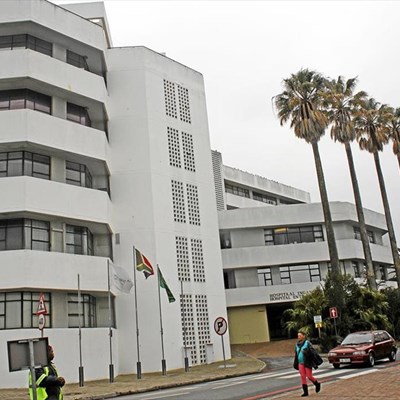 Mediclinic George has no place to expand at its current site. Its application to develop a new hospital at Kraaibosch has been unsuccessful thus far. Photo: Alida de Beer

GEORGE NEWS - George Municipality for a second time turned down the development application for a new hospital building for Mediclinic George.

The applicant, Magnolia Ridge Properties, appealed the municipality's rejection of their application in April this year. Last week, they received notification of the appeal committee's finding to uphold the dismissal.

Mediclinic George Manager Kassie Karstens expressed his disappointment, but said Mediclinic International remains committed to roll out the project in George. "We will be seeking other options, but cannot reveal anything at this stage. It is a pity. We are two years further down the line and we have not started yet. This is an urgent project."

In 2015, Mediclinic announced their plans to develop a new R700-million hospital on eight hectares of land in Kraaibosch next to the Outeniqua Family Market. They had hoped to start with construction in 2018.

In a letter explaining the motivation for its decision, the municipality said that no new evidence was presented to demonstrate error on the part of the authorised official's decision to dismiss the application.

The proposed development is "inconsistent" with the George Spatial Development Framework (SDF) and with the "broader spatial planning principles as set out in Lupa (Land Use Planning Act) and Spluma (Spatial Planning and Land Use Management Act)".

Fred de Kock, one of the developers at Magnolia Ridge Properties, said that they will be taking the municipality's decision on legal review. "We believe the municipality has made a mistake.

"They cannot ignore the fact that the land is zoned industrial and that there are therefore already urban use rights. We will approach the court to confirm this. Time will tell what we will do with the land."

They applied for the subdivision, consolidation, rezoning and departure of consent use of erven 25538 and 25541. The old Urbans sawmill is situated on one of the erven. When De Kock bought the land several years ago, it lay inside the urban edge.

"When the urban edge was shifted inwards in 2013, this piece of land was cut out for no valid reason," said De Kock. He furthermore maintains that he signed a services agreement with the municipality in 2008 that confirms redevelopment of the land. "I am in a difficult position. I have been wronged and I believe we have not had a fair appeal trial."

His partner Arno de Vos said, "It is a sad day for George. The decision is disappointing. We have lost trust in our municipal system."

According to Karstens, the hospital is full during the week. "We are ready to start building. Plans for the new hospital have been drawn up in cooperation with the doctors.

This new hospital will be such a boost for the economy of the region, and with the proposed public private partnership with the state hospital it will make a difference in the healthcare service delivery to all patients, not only privately insured patients."

Surgeon Dr Leonie Schoeman said doctors "are reaching a level of desperation" with the current premises. "There is huge pressure on bed availability at the hospital. We are also keen to rethink the layout of wards, the ICU, and theatres to be more suitable to new technology, but it is not possible at the current hospital."

The Geneva hospital as well as the oncology and radiation units will be incorporated into the new hospital. Plans also include a doctors' block and a cardiac unit.

Read a previous article: No go for Mediclinic site