No go for Mediclinic site 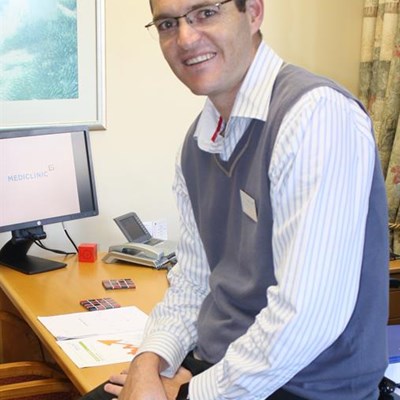 Kassie Karstens, manager of Mediclinic George. Photo: Alida de Beer
GEORGE NEWS - The development application of Mediclinic George for its new hospital at Kraaibosch has been turned down by the George Municipality.
In its refusal letter to the applicant, Magnolia Ridge Properties, the municipality said the proposed development, which falls outside the urban edge, is "in conflict with the spatial planning objectives" of the George Spatial Development Framework (SDF). Adequate land within the urban edge is available for the new hospital.
The letter states that "the amendment of the SDF to accommodate the proposed development, would result in a significant shift in the short and medium development trajectory of the municipality, on land that was only intended to be developed in the long term."
The land falls out of the urban edge and the SDF would have to be amended to allow for the development.
Disappointed
Mediclinic George manager Kassie Karstens told the George Herald that they are disappointed, but understand that the municipality has its regulations to follow. "We are now looking at other possibilities. Mediclinic is eager to start building the new hospital. Building plans have already been drawn up with input from the medical specialists currently working in the hospital."
When the move was announced in 2015, the hospital was hoping to start construction in 2016 and aim for completion in 2018.
Karstens did not want to reveal what other options are available, but said single opportunity is investigated. "The existing facilities will become too small at the rate the town is expanding and parking space remains a problem. We are starting from scratch, but the municipality assured us of their co-operation and that they are grateful for the investment of such quantities in George. This project is not only an investment in George, but it will serve the bigger Eden district as well."
The application for the R600-million development was launched 18 months ago in August 2015. It involved the subdivision, consolidation, rezoning and departure of consent use of erven 25538 and 25541 in Kraaibosch - the old Urbans sawmill is located on one of the properties near the Outeniqua Family Market.
Landlord appeals
Landlord Fred de Kock of Magnolia Ridge Properties is appealing the decision and has requested more detailed reasons behind the outcome from the municipal manager. "The decision reached cannot be described as appropriate, based on the facts or even a relatively superficial assessment of the development proposal. The municipality fails to explain sufficiently why the decision was taken and provides no details of the reasoning process behind it."
De Kock said when he developed the nearby Welgelegen Estate, the access road (that also services the erven related to the hospital application) was built by his company according to the municipality's requirements and in terms of a services agreement, with additional future developments in mind.
"At the time, all the land he had acquired, including the sawmill site, fell within the urban edge, which then ran along the flow of the Swart River. The urban edge was shifted inwards in 2013, cutting out the sawmill site. "The fact that the sawmill site is zoned as Industrial Zone 1, indicates that it already has urban use."
Inconsistent
He said the municipality is also "inconsistent" in the manner in which they interpret the long-term proposals outside the urban edge. "The sawmill site is part of the identified Eastern Gateway Node and is just opposite where Destiny Africa* had been proposed. In a planning report, municipal officials stated that once there was certainty that Destiny Africa would go ahead, the urban edge would be amended to include it."
De Kock reckons approval for the application does not require an amendment of the SDF. He said in terms of Spluma (Spatial Planning and Land Use Management Act), an application may be approved which is inconsistent with a municipal SDF, provided there are site specific circumstances.
"The officials have not analysed the circumstances and provided accurate or meaningful reasons why they do not regard them as valid site specific circumstances. There is adequate land for future expansion of the hospital, adequate parking and no localised traffic congestion, good accessibility from major roads, good visibility and regional reach and it is the preferred location of the medical service providers. No other site in George currently has all these advantages."
Objections to the application were received from two other developers, Rainbow Place Properties and Fynbos Road Hole Developments.
State-of-the-art
The new Mediclinic George will be a state-of-the-art facility that will incorporate the Geneva Clinic, a separate doctors' block and a cardiac unit. According to Karstens, the pathologists and oncologists have also indicated their intention to move with Mediclinic and the new hospital will be a "one-stop medical village".
A sales agreement with De Kock for five hectares of land for the development is subject to the relevant approvals by the authorities.
* Destiny Africa was a multi-billion rand development proposal that had been envisioned just opposite the N2 from the proposed hospital development. Premier Helen Zille officiated the launch in George in 2009.
Click here for previous articles:
• New Mediclinic: Decision expected soon
• Application for new Mediclinic making progress
• New R500-million Mediclinic George
• Specialists need proximity to hospital
ARTICLE: ALIDA DE BEER, GEORGE HERALD JOURNALIST
'We bring you the latest George, Garden Route news'