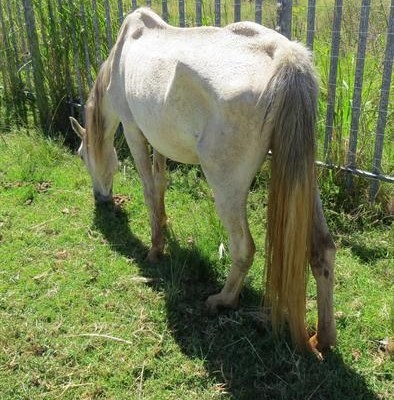 Perhaps if they headed his wise words, the 44 horses would not have been found by a committee member of the Oudtshoorn SPCA in such an appalling condition, nearly starved to death.

Members of the horse unit from the Cape of Good Hope SPCA drove from Cape Town and Tack 'n Tuck lent the operation an additional horsebox to assist with the rescue of these unfortunate animals.

On the wheretostay website, Ikkos Equine Sanctuary is described as a sanctuary rescuing abandoned and abused equines and other animals. "Ikkos equine therapy. Come and walk with our equines, groom and feed them and get to know them." The website says further that they offer work experience with Ikkos Equine Sanctuary, Animal Haven Petten Farm and The Meerkat Magic Conservation Project.

"When I arrived at the 'sanctuary', there were 44 horses, with most camps having little or no grazing," says a visibly distressed senior inspector Salomé Botha. "On speaking to the owners, I discovered that they were giving the horses four bales of feed a day. For that number of horses they should have been supplying 40 bales a day. And yet they were actively advertising themselves as a 'haven' for abandoned and abused equines and other animals."

One horse had sadly collapsed and could not be saved, 16 others, although walking skeletons, were adjudged by the Garden Route SPCA Mossel Bay contract veterinarian, Dr Susi Kok, as savable.

Once the horses in the worst condition, and a couple of donated "rescue animals" had been identified, the owners of Ikkos Equine Sanctuary signed them over to the Garden Route SPCA, and the transfers to George began.

Thanks to the long hours from the dedica-ted Garden Route SPCA staff, the last of the horses were safely ensconced at the SPCA in George by Saturday night (9 March), hungrily devouring the bales of oat grass and guzz-ling the fresh water.
Unfortunately, early on Sunday, a large black mare collapsed, and could not get back onto its feet.

Dr Elke Scheullnus, SPCA contract veterinarian in George, administered several drips, while volunteers and staff kept the anxious mare watered and quiet through the day and night. By Monday morning she was still unble to stand, and reluctantly the decision was made to end her suffering. "

"I'd like to thank all the generous and caring volunteers who donated food and assisted the SPCA staff on Sunday," says Heather Church, chairperson of the Garden Route SPCA. "These horses will require a great deal of food and medication, so we are appealing to animal-lovers for some help. If anyone can make even a small contribution, it would
really be appreciated".

"And if anyone has a serviceable, double horsebox that they would like to donate, we'd be really, grateful!".
The Garden Route SPCA has long had a double horsebox on the top of their wish list but simply do not have the funds to acquire one.