Ballot's Bay reserve manager Warren Lubbe where the Meulen River carries sewage out to sea at Ballot's Bay. These days, the once pristine river is a dark colour and virtually all life forms have disappeared. Photo: Alida de Beer

GEORGE NEWS & VIDEO - A major sewage spill in the Meulen River on Wednesday 12 February has placed the shocking state of the river and river mouth firmly in the spotlight.

The sewage washed down the river and was swept out into the ocean at Ballot's Bay where the river exits.

It was feared the spill would pose a health risk for surfers at Victoria Bay, just 300 metres away.

The ocean current carrying the sludge in that direction was witnessed by residents living at the top of the cliffs overlooking the sea.

Ballot's Bay reserve manager Warren Lubbe, who alerted the George Municipality of the spill, said regular sewage spills in the Meulen River over the past few years have been responsible for wiping out virtually all life in the river. It has become so bad that a permanent sign board has been put up to warn people against swimming at Ballot's Bay.

On Friday 14 February, George Municipality issued a statement saying that the latest spill constituted an "Alert Level 2 response" and it "has been contained".

The required repairs would be completed on that same day and the condition of the water should be "100%" after a clean-up over the weekend. Water test results for the river and river mouth confirmed sewage contamination, but the results from water sample tests in the sea at Ballot's Bay indicated levels "well within" acceptable levels for swimmers.

Pump station
The statement mentioned a blockage caused by objects dumped in the sewer line upstream as the cause of the spill, but did not mention that a defect at the Meul sewage pump station had caused spillage in the river, as stated in an e-mail from the civil engineering department to Sally Kennedy, environmental director of the Ballot's Heights Property Owners Association.

The municipality said spillages "are not uncommon" and that, according to the George Wastewater Risk Abatement Plan, the local authority is required to plan for such incidents. The plan is aimed at "consistently assuring acceptable and safe wastewater management".

Kennedy objected to the municipality's statement that the Alert Level 2 incident has been contained. "This implies that it was a once-off event and not a regular occurrence, that the problem has been solved and the public has no need to be concerned. They also state that spillages are normal - this is way beyond normal. The river is constantly polluted." 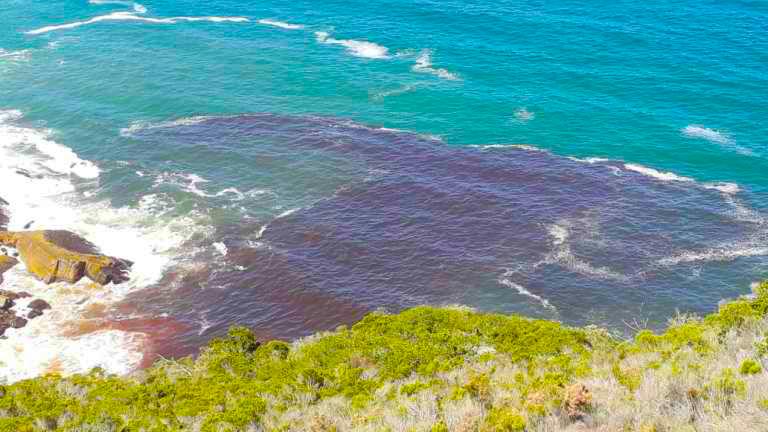 A resident supplied this photo taken from the cliffs above Ballot's Bay. A current carried the sewage sludge towards Victoria Bay, to the left.

She provided photos taken in 2012 that show a crystal clear river and ocean, and said it had never been a "Coca-Cola" river as suggested by an official of the civil department.

"The river is now at all times slightly varying shades of opaque brown or black. The Cape clawless otter has disappeared, kingfishers, black oystercatchers, frogs, dragonflies - all signs of a healthy river and estuary - have disappeared. Reeds and other estuary vegetation have been depleted, fresh seaweed on the rocks in the sea has disappeared, as have the mussels and all other sea life at the river mouth."

Kennedy said in April 2016 an investigation by the authorities into the cause of the spills showed photos and video footage of overflowing sewers, broken pipes and mounds of litter. Since then, random water tests by the municipality all show sewage grade levels of faecal coliform. The Meulen River mouth was crispy clean in 2012. Photo supplied