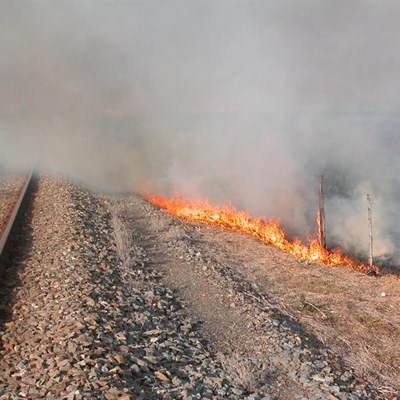 A fire also raged next to the railway line between the industrial area and the George cemetery. Photo Myron Rabinowitz
GEORGE NEWS - "For the first time in two weeks I will be able to sleep peacefully," said Betty Douries last week Wednesday while watching volunteer firefighter Christo Theron back-burning the thick undergrowth behind her house in Geelhout Street, Pacaltsdorp.

Theron says back-burning is literally fighting fire with fire. "It is a way of reducing the amount of combustible material by starting small fires in a controlled way in a predetermined area to act as a natural firebreak."

When Douries woke on Tuesday morning after a restless night and felt the balmy weather in the air, she was very concerned as the area behind her house had been burning on and off for two weeks. "Next to our fence is a thick overgrown gully with heaps of dried black wattle branches that had been cut down earlier in the year. I jumped for joy when I saw the municipality's fire engine arrive. They immediately started control-burning the area."

Neels Barnard, divisional commander of George Fire Services said his men will need a rest as they have been working around the clock for the last two weeks. "This time, thankfully, there was no loss of life or property. The areas where we worked the most was behind Thembalethu towards the sea; from the show grounds towards Rooirivierrif and Kingswood; in the industrial area towards the cemetery; and to the west of Pacaltsdorp in the area around Syferfontein. We are thankful for the valuable support of the Eden Fire Services and for the rain that fell at the right time." Strong winds fanned the flames and made the firefighters' work even more challenging.

The cause of the fires are still unknown, but it is suspected that some of the fires were started by arsonists who like to see the fire brigade in action. In the past farmers have also been accused of starting fires in an effort to improve grazing.