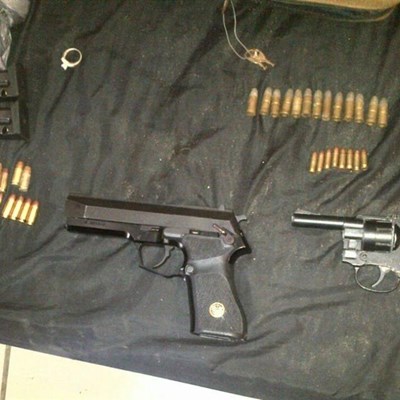 These firearms and ammunition were confiscated in Thembalethu.
GEORGE NEWS - Three men from George were arrested during two separate raids last week after police found unlicensed firearms and ammunition in their homes.
These raids came after police received information from members of the community.
Lucky Chake (34) and Pinky Wahluthu (26) were arrested at a house in Zone 6, Thembalethu, last Wednesday during a joint operation by members of the Southern Cape Tactical Response Team (TRT), Thembalethu Police and the Outeniqua K9 (George) dog unit.
According to Captain Malcolm Pojie, Southern Cape Police spokesperson, members, with the assistance of the police dog Bingo, found two firearms, a 9mm Vector pistol and a .22 revolver in a wardrobe in a bedroom where the accused resides. Police also confiscated two magazines and various rounds of ammunition.
On Thursday, members of the Conville Police arrested Sibusiso Masane (30) at his home in Lawaaikamp.
Pojie said police found a firearm with ammunition in Masane's bedroom. The firearm's serial number was filed off.
The three suspects appeared in the George Magistrate's Court last Friday on charges of illegal possession of firearms and ammunition, alternatively for the possession of unlicensed firearms and ammunition.
The firearms will be sent to the police laboratory for analysis to determine the possibility that these firearms could have been used in any crime.
Brigadier PV Cetyana, acting commander of the George Cluster, commended the members involved for their diligence and commitment to bring these suspects to book.
In the meantime, Western Cape Minister of Community Safety Dan Plato on Monday welcomed the arrest of a Gauteng police officer after he was implicated in the alleged illegal sale of firearms to gangsters in the Western Cape.
"For months communities have told me, the police and anyone who will listen, that gangsters are using police firearms and I have escalated these reports to the highest police offices in the country in terms of my oversight role over the SAPS in the Western Cape. This news confirms that our communities know what is going on around them and the police should value their information," said Plato in a media statement.
In his statement, Plato also referred to an article that appeared in The Star newspaper on Monday claiming that firearms that had apparently been destroyed by Gauteng Police have ended up in the hands of Western Cape gangsters.
'We bring you the latest George, Garden Route news'