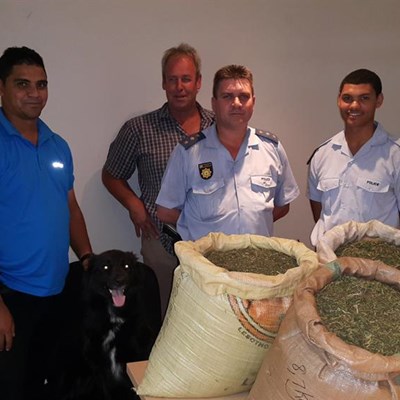 From left: Sergeant Ashley Carolus with his dog, Mike Kritzinger, Captain Sampie Stander and Constable Pierre Treurnicht with the dagga which was confiscated.
GEORGE NEWS - Search warrants were executed at various houses in the Conville area in March, leading to the arrest of four men and a woman.
One suspect, Headman Jan (47), was arrested for the second time last Thursday for the possession of dagga after he was released from jail earlier that same day. He was arrested the previous day (Wednesday), also for the possession of dagga.
According to Warrant Officer Gerhard Wiese, Conville communication officer, Constable Auburn Lewis of the Crime Prevention Unit (CPU) arrested Jan on 11 March at a house in Lawaaikamp.
"The storeroom on the premises was searched and a parcel of dagga was found inside a drum. Jan was arrested, but released on 12 March. Later that same day, Captain Sampie Stander again executed a search warrant at the house and saw Jan in a room in the backyard. The house was searched and 18,7kg of dagga was confiscated. Jan and Siyabonga Mdeni were arrested," said Wiese.
Another search warrant was executed by Captain Stander at a house in the same street last Wednesday where a police dog and handler Sergeant Ashley Carolus of the Outeniqua K9 Unit, sniffed out dagga (11,6 kg) in a hole in the backyard. Police arrested a woman, Hlaleleni Gcuwa.
Earlier this month on 6 March members of the CPU confiscated 23-litres of liquor and arrested Henry David Jacobs (58) in Protea Park. At another house in Rosemoor, tik and dagga worth R5 600 as well as electronic equipment to the value of R40 000 were confiscated. Police arrested one suspect, Mpendulo Msebenzi.
'We bring you the latest George, Garden Route news'
Posted on: 08:00 Sun, 22 March 2015