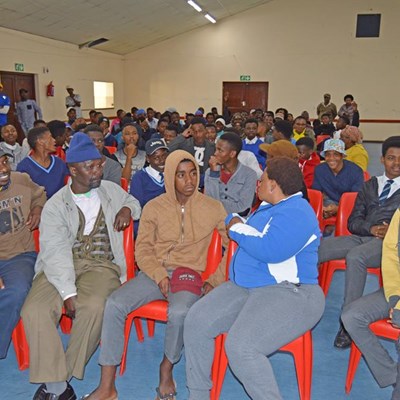 Male learners and parents gathered at Monday's meeting in the Thembalethu community hall to discuss the violence among youngsters.
GEORGE NEWS - The competition between Thembalethu youngsters who try to outdo each other with expensive branded clothing, has reached such drastic levels, that in recent months the rivalry has often turned violent - perhaps even leading to murder.
Police this week expressed great concern about this trend which had reared its ugly head at two high schools in the area, Thembalethu High and Imizamo Yethu High. Boys from these schools have allegedly formed street crews who go head to head during battles.
They sling insults at one another about whose clothes are the most expensive and stylish, and brag about who gets the girls and consume the most expensive alcohol.
On Monday the Thembalethu police management, the Thembalethu community police forum (CPF), parents and some 100 male learners attended a meeting at the community hall to find a solution.
Captain Dumile Gwavu, the Thembalethu police communication officer, said that they have been talking to learners since July following reports of fights, on and off school premises.
The police, teachers, school governing body (SGB), department of education, and CPF are all involved to address this growing problem.
"When the students were called in with their parents for a meeting at the police station, it was discovered that they are divided into groups such as X-Keem Samahlanya, Mexicans, Milano, Italians, G for S, Vodka, and Chicago - all under the name of 'Izikhothane', people who compete with the clothes they wear," says Gwavu.
Serious cases such as murder, attempted murder, aggravated assault and the illegal possession of a firearm involving these groups are currently under investigation by the police.
During searches at the two schools, knives and other dangerous weapons have been found in the learners' bags.
"Some fights start in the township and spill over to the school. Stabbings on the school premises have also occurred, raising concern about the safety of teachers and other learners," added Gwavu.
Col Ruben France, Thembalethu station commander said underlying socio economic problems are at the root of the boys' actions. "They are frustrated by their living conditions and their bleak futures. Poverty, single parenting and exposure to domestic violence are contributing factors.
We have asked parents to be more involved in their children's lives." He said they will attempt to change the boys' mindsets through various programmes and that the police will take strong action against youngsters involved in violence.
• The word Izikhothane is a combination of two Zulu words: Izikhotha (to lick) and Ukukhothana (to mock).
Originating in the early 2000s in Soweto and Diepsloot, the term is township slang for "the one with the most expensive clothes".
Izikhothane refers to showmanship or dance battles in which people compete against each other in front of crowds to determine which party is wealthier. Izikhothanes are rarely from affluent backgrounds and spend beyond their means in order to create a perception of opulence and gain social status.
(Source: www.theizikhothanesubculture.wordpress.com)
ARTICLE: LIZETTE DA SILVA, GEORGE HERALD NEWS EDITOR
'We bring you the latest George, Garden Route news'