Bonga's day as a policeman 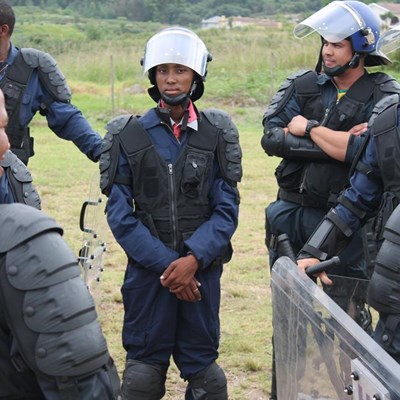 Bonga (middle), who dreams of becoming a policeman, was part of the Public Order Policing Unit (POP) on Tuesday.
GEORGE NEWS - The Reach for A Dream foundation has made the dream of a local young man, who suffers from a life-threatening condition, come true.
*Bonga (18), a Grade 12 pupil from Thembalethu, has always dreamt of becoming a policeman, but because of his illness, his dream may never become reality.
On Tuesday, thanks to Reach For A Dream, Bonga joined the men in blue for an exciting day on the beat. Bonga's mother, Nolizwe, accompanied him on this special day.
According to Heather Mazomba, Reach For A Dream projects coordinator, they heard about Bonga's illness at George Hospital.
"We spoke to his parents and did an assessment. During the assessment, Bonga said he wanted to be a policeman to help control the crime in Thembalethu," said Mazomba.
The plan to give Bonga a taste of his dream was put into motion. Between Mazomba, Southern Cape Police spokesperson Captain Malcolm Pojie and other members of the police, they arranged the exciting day.
'Constable' Bonga, dressed as a member of the Public Order Policing Unit (POP), rode in a Nyala participated in a staged POP operation near the SAPS regional office in Heatherlands, executed an 'arrest' and handled a police dog - all during his first day on the beat!
Lieutenant-Colonel Caryn Kritzinger, from the Outeniqua K9 Dog Unit at the Pacaltsdorp Police Station, awarded Bonga with a certificate after she showed him how to handle her search and rescue dog, Ziggy.
A tired looking Bonga looked very happy and satisfied following the exhilarating activities of his day in blue.
For more positive stories on how Reach For A Dream make ill children's dreams come true, go to www.reachforadream.org.za.
* Bonga's surname and the details of his affliction is withheld on request by his parents.
ARTICLE AND PHOTO: HENRICA VELDMAN, GEORGE HERALD JOURNALIST
'We bring you the latest George, Garden Route news'

Read more about: reach for a dream bonga policeman