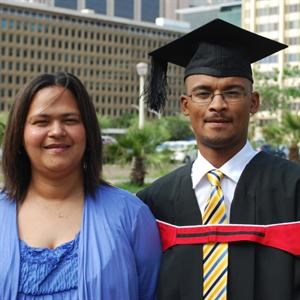 Johannes Jumat and his great inspiration, his wife Yolanda, after his graduation ceremony in Cape Town in October.
GEORGE NEWS - "It is surprising how people love to help someone who is willing to help himself."

Wise words from a man who can personally vouch for this. Former security guard, 33-year-old Johannes Jumat, proved that it is possible to defy all odds when he became a LLB law graduate in October last year.

Jumat, who matriculated from Parkdene Secondary in 1995, had to give up his engineering course in Port Elizabeth after one year when the company who sponsored his studies decided to end their bursary programme.

Jumat returned to George and found a job as a security guard, first at Fancourt before moving to Nedbank in York Street. There he charmed clients and even won R20 000 when he walked away with the Warmest Smile title in South Africa.
It wasn’t long before one of the clients, Gustav Pienaar, a director at Raubenheimers Attorneys, offered him a job as a messenger at the firm.

Jumat said he grabbed the opportunity with both hands. "It was a sound career move and when the company gave me the opportunity to study, it was a dream come true."
Pienaar, who has subsequently retired, says Jumat always stood out. "You couldn’t help but notice him. He was friendly and efficient and a pleasure to watch.

"When we offered him the job and he started studying, he had to work incredibly hard. Arriving for work in the morning, Johannes would already be there in the library studying and when we left at the end of the day he would still be nose in the books. This, while he still had to fulfil all his other work obligations. I have the highest respect for his work ethics and everyone at Raubenhemers is incredibly proud of him. He is a true role model."

Jumat says his wife, Yolanda, is his anchor and without her support and sacrifice it would have been even more difficult to achieve success. "We have three children and at times it was very tough. Whenever I was feeling overwhelmed and self-doubt would set in, she inspired me to keep going. She always said, ‘We can do it’."
At the moment Jumat is doing his articles and works as a candidate attorney at Raubenheimers before he will write his attorney admission exams.

"The best advice I can give anyone with a dream is to keep your eye on the ball and never give up. Eventually you will succeed."