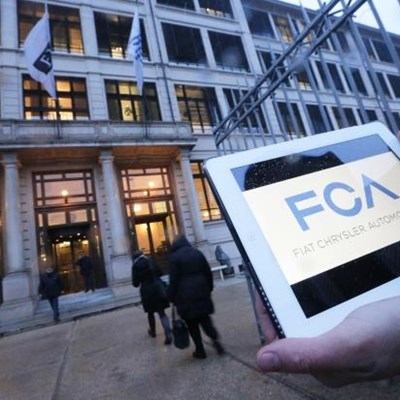 (Generic image)
INTERNATIONAL NEWS - The combined Fiat Chrysler Automobiles is counting on expanding sales at Jeep, Alfa-Romeo and Maserati and a revival of the Chrysler brand to place it firmly in the top ranks of global automakers.

There are many new products, including a full lineup of cars from Alfa-Romeo, as well as some victims. Jeep is ditching the Compass and Patriot small SUVs in favor of a new compact SUV that will come out in 2016. And after 30 years on the market, the Dodge Grand Caravan minivan will be killed off in an effort to focus Dodge on performance cars and boost sales of the Chrysler Town and Country.

While the company won't officially be known as Fiat Chrysler Automobiles until a Fiat shareholders meeting this summer, the 400 analysts, media and other attendees at Tuesday's event were welcomed by a sign with the new company name at the entrance to Chrysler's sprawling campus north of Detroit.

Shares of the combined company are expected to begin trading jointly on the New York Stock Exchange and in Milan, Italy, by the end of this year.

"Today we stand before you as a global carmaker," Marchionne said. "Today is much more than a new chapter. We are beginning to write a completely new book."

Marchionne, 61, said he expects to remain CEO through 2018 to make sure the plan gets delivered.

Chrysler will become the mainstream brand for North America, designed to compete with Toyota and Chevrolet. The Town and Country minivan will get an update and add a plug-in hybrid version in 2016. A new compact car, the 100, arrives in 2016. A year later, a full-size crossover will be launched to compete with the Ford Edge and Nissan Murano. The crossover will also come in a plug-in hybrid version.

Dodge will lose the Grand Caravan and the Avenger sedan and concentrate on being a sporty, performance-oriented brand designed to appeal to younger buyers. The SRT brand, which includes the Viper sports car, will be consolidated with Dodge and considered the "halo" of the Dodge brand.

Alfa-Romeo, which returns to the U.S. this year with the 4C sports car, plans to introduce eight vehicles globally by 2018, including small, midsize and full-size cars and two SUVs. Alfa CEO Harald Wester says the company will invest nearly $7 billion to develop and make the new vehicles, which will be positioned as direct competitors to BMW and Mercedes-Benz. Alfa hopes to increase sales from 74,000 in 2013 to 400,000 in 2018.

Jeep sales are expected to top 1 million this year, and can grow to 1.9 million by 2018 with an aggressive global expansion, particularly in Latin America and Asia, the company said. A new compact SUV in 2016 will replace the Compass and Patriot, and the seven-passenger Grand Wagoneer will launch in 2017. Jeep currently makes vehicles at three plants in the U.S. By 2018, it expects nearly half of all production to come from plants in Latin America, Europe and China.