Diabetes rates in the country have increased by an alarming 155% in the last decade alone – making it the second most common cause of death in SA.

LIFESTYLE NEWS - Decades of local and international research into Rooibos’ anti-diabetic properties confirms its effectiveness at improving sugar levels when used in conjunction with a healthy lifestyle and should form part of a holistic strategy to tackle the disease say experts.

According to the International Diabetes Federation (IDF), an estimated 4.5 million South African adults are likely to have diabetes.

What’s even more frightening is that diabetes rates in the country have increased by an alarming 155% in the last decade alone – making it the second most common cause of death in SA.

“Diabetes is possibly the biggest non-communicable (NCD) epidemic of the 21st century. It’s a major public health threat everywhere in the world and there is a growing incidence of type 2 diabetes among adolescents and children as well, which is of grave concern.

“In most cases, type 2 diabetes is as a result of poor eating habits and sedentary living, aggravated by other detrimental lifestyle behaviours, such as smoking and excessive alcohol intake. Research has shown that in many cases the disease (if intervened early on) could be reversed by making the necessary dietary and lifestyle modifications. Rooibos tea could play an important role in this approach.

“Aspalathin – a unique phenolic compound found only in the Rooibos species – has been shown to improve blood glucose levels and therefore could help to reduce the risk of type 2 diabetes. Our research found that green Rooibos, which is more abundant in aspalathin, was especially effective at lowering raised blood glucose levels in animal studies. In these studies aspalathin, enhanced insulin activity, the hormone that controls blood sugar levels, by reducing inflammation and oxidative stress, which are factors that underlie the development of metabolic diseases such as obesity, type 2 diabetes and cardiovascular disease,” explains Prof Muller.

Diabetics are two to four times more likely to die from heart diseases or stroke. Here, Rooibos can be of benefit too. Aspalathin also protects the heart by suppressing vascular inflammation and atherosclerosis (plaque build-up inside artery walls) that occurs as a result of high blood sugar levels.

Due to Rooibos’ rich antioxidant activity and potential for clinical use, it is gaining more attention worldwide.

Joe Swart, Research Director for the SA Rooibos Council (SARC) says in view of the limited access, long-term inefficacy and side effects of oral anti-diabetic medication in Africa, plant-based therapies for the treatment and prevention of NCDs are gaining considerable prominence.

“Scientists have already developed a method for the synthesis of aspalathin into an active pharmaceutical ingredient and for use as a nutritional supplement.

“Aspalathin-rich green (ARG) Rooibos extract can be utilised in novel therapeutic preparations for the treatment and management of metabolic dysfunction, including the control of glucose and cholesterol, which in turn reduces the risk of heart disease. The products have application in the complementary medicine, nutritional supplement and veterinary markets. Rooibos shouldn’t be viewed as a panacea, but in conjunction with a healthy lifestyle, it could significantly improve health outcomes,” he says.

In the lead up to 14 November, which is World Diabetes Day, the aim is to bring attention to diabetes and to encourage cleaner living as a preventative measure. 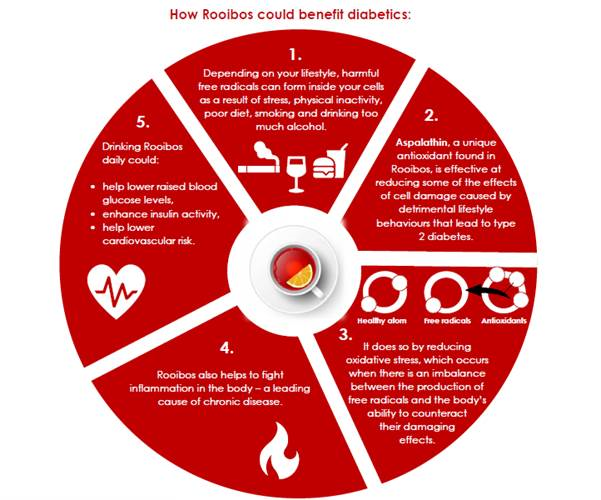