Could there possibly be any scarier way to watch 'Jaws'? 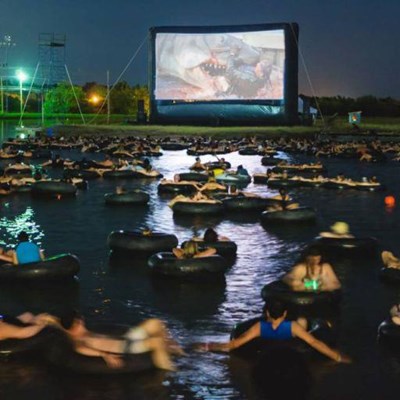 Photo: www.randomhippo.com
INTERNATIONAL NEWS - It may have been 40 years since Steven Spielberg released "Jaws," but for many of us the haunting two-note intro to its terrifyingly familiar theme song continues to reverberate in our brains every time we go in the water.

Doesn't matter how many articles are written to remind us that "Jaws" got it all wrong -- great white sharks aren't vicious murderers out to hunt us all down.

When it comes to leaving an audience in excruciating suspense, "Jaws" will forever be the master.

Which is why we can't think of a more terrifying way to watch the famed mechanical shark wage psychological warfare on the residents of Amity Island than what Austin, Texas's famed Alamo Drafthouse has planned for this weekend: while floating in inner tubes over murky waters.
The Alamo Drafthouse, famous for its strict "no texting" policy during films, first hosted an outdoor floating "Jaws" screening in 2002.

This year, in honor of the film's 40th anniversary, organizers decided to bring the concept back as part of the Drafthouse's ongoing "Rolling Roadshow" series.

The second of two outdoor screenings will take place on Saturday, July 11, on a man-made lake at the Texas Ski Ranch, located between Austin and San Antonio.
Read more on CNN.
Posted on: 15:39 Tue, 07 July 2015