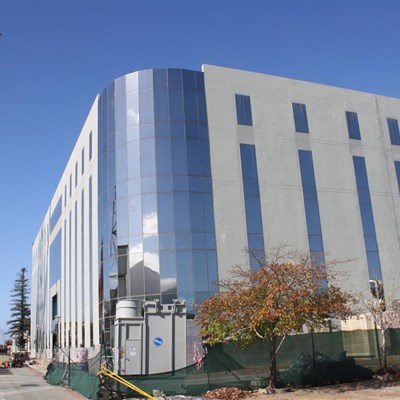 A crane of Coastal Rigging loading parts and materials onto the roof of York Park for the installation of lifts. Photo: Alida de Beer
GEORGE NEWS - The York Park building which used to house the taxman is being upgraded and modernised at a cost of R55,8-million.
The Western Cape Government acquired the building in 2013 intending to consolidate and relocate its George provincial offices there.
A section of the building has been standing empty after the SA Revenue Services moved out to its new offices at the Garden Route Mall.
According to Byron la Hoe, communication officer for the Department of Transport and Public Works, the work currently underway involves the replacement and upgrading of the bulk infrastructure of the building.
"Outdated and obsolete equipment is being replaced and updated.
"Once these projects are completed, the modernisation of the entire building will start," he says.
The total of R55,8-million includes upgrading the lifts (R9,6-million) and the air-conditioning system (R37,6-million). Electrical infrastructure will amount to R8,6-million and will include a new standby generator. These projects should be completed by early July.
"The offices previously occupied by the SA Revenue Services are being used by the contractors as site offices and storage space for the duration of the contract. The future use of the space is currently in the design stage," says La Hoe.
ARTICLE & PHOTO: ALIDA DE BEER, GEORGE HERALD JOURNALIST
'We bring you the latest George, Garden Route news'