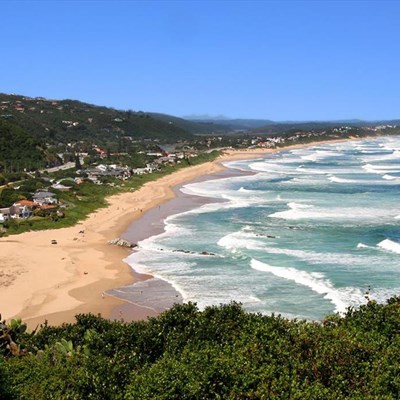 Wilderness beach was granted Blue Flag status last year, but this has lapsed for the simple reason that the annual application was not handed in by Eden District Municipality. Photo: Wessel van Heerden

GEORGE NEWS - Although Wilderness beach meets all the criteria to obtain Blue Flag status, Eden District Municipality (EDM) neglected to hand in the necessary application, despite being prompted to do so. As a result the beach failed to get the much sought-after award which international tourists often look for before making a destination choice.

Blue Flag National Coastal Coordinator Robert Slater confirmed last week that EDM did not put in an application despite the fact that Wilderness beach (in the NSRI area) came tops during the assessment.

"The water quality tested fine, the ablution facilities were clean, lifeguards were on duty and beach cleaners were deployed."

Eden District Municipality apologised for the oversight and promised that an application for next year will be submitted timeously.

She referred George Herald to Eden District Municipality, who has up to now handled the applications for Blue Flag status of beaches.

George's Tourism Manager, Joan Shaw, said Wilderness beach is spectacular - with or without Blue Flag status. "Tourists will visit Wilderness for its rugged beauty, scenery and activities," she said.

Edwards-Klose said lifesavers will be deployed to beaches during the summer season as usual.

"George Municipality is responsible for cleaning the Leentjiesklip section of Wilderness beach [stretching from Dolphin's point to the Touw River estuary].

"George has three permanent employees cleaning the toilet facilities and surrounds at Leentjiesklip.

"The services are augmented during high season with contract workers as well as Working for Coast teams." Wilderness beach is well-known for its rugged beauty, scenery and activities.

Neighbours flying high
In the meantime all the neighbouring municipalities such as Hessequa, Mossel Bay, Plettenberg Bay and Knysna have paid their R24 000 application fee and are now proudly displaying their blue flags.

In the offshore adventures category, Robberg Express in Plett qualified for a Blue Flag.

Ceremony
Sixty-two Blue Flags will be proudly flown at 44 beaches, seven marinas and on eleven sustainable tourism boats around South Africa over the forthcoming 2017/18 Blue Flag season, which opens on 1 November.

This was announced at the national Blue Flag launch hosted by the Kouga Municipality at Dolphin Beach in Jeffreys Bay on Wednesday 4 October.

The Western Cape boasts the highest number of Blue Flag sites, comprising 28 beaches, all eleven boats and six of the seven Blue Flag marinas in the province.

Since its launch in 1987, the Blue Flag programme has continued to grow, not only regarding the number of member countries and sites involved, but also in its range of expertise within marine and freshwater environments.

Wessa has been the national implementing partner for Blue Flag in South Africa since 2001.

Read a previous article: No blue flag status for Wilderness