Davies said a national Second Wave Task Team has indicated that it is almost impossible to predict whether South Africa will have a second wave, when it will come, where, and how big it will be.

GARDEN ROUTE DISTRICT NEWS - The number of Covid-19 deaths in the Garden Route dropped by about a third (34%) in the past week compared with the previous week.

In George, six people passed away during the past week, bringing the total number of Covid-19 deaths in the city to 102. (Keep in mind that George hospitals accommodate Covid-19 patients from across the district.)

Oudtshoorn recorded eight deaths in the past week.

Garden Route Disaster Management chief Gerhard Otto says this town is one of the persistent hotspots.

"Oudtshoorn is the biggest worry at the moment with a percentage of total active Covid-19 cases of 14,59%.

The number of deaths in Oudtshoorn is also a concern. "It is 5,8% of the total of Covid cases. They have recorded 74 deaths so far, second most in the district. George has recorded 102 and Mossel Bay is third with 63," said Otto.

Serology testing
Serology testing for the virus done by Western Cape Health on 3 000 people at health facilities in the Cape Town Metro revealed that 40% have previously been infected with the virus.

According to Prof Mary-Ann Davies, director of the Centre for Infectious Disease, Epidemiology and Research (Cider), this indicates that a relatively high proportion of the population has been exposed to and infected with Covid-19, especially in poorer communities.

As a result, "explosive" outbreaks in high-density communities in the Metro are unlikely as there seems to be some immunity, "at least in the short term."

They suspect that this immunity is contributing to the decline of the epidemic amid the lessening of restrictions.

A sample of people that represents the general population is still to be done, said Davies.

There are still population sub-groups, also in these high-density communities, that would be vulnerable to outbreaks because of people who have effectively shielded themselves during the last five months.

Second wave
Davies said a national Second Wave Task Team has indicated that it is almost impossible to predict whether South Africa will have a second wave, when it will come, where, and how big it will be. Surveillance is critical. 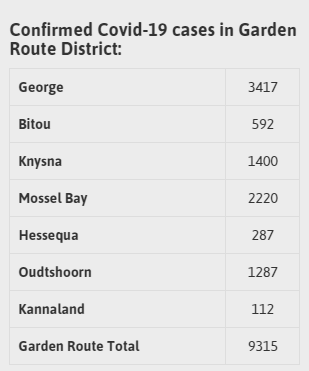