The R404 in George is closed for traffic after some roofing material hit a powerline just west of the roundabout between Blanco and the George Airport. The area is without electricity.

In other parts trees have been uprooted and walls came down.

The South African weather office warns that more bad weather can be expected as an intense cold front is set to hit the Cape province today. 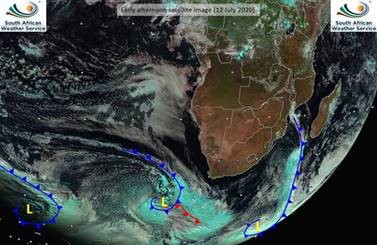 A cold front, expected to make landfall over the south-western parts of the Western Cape early on Monday morning, will result in gale to strong gale force (65 – 100km/h) north-westerly to westerly winds over the Western, Northern and Eastern Cape Provinces as well as along the coast between Cape Columbine and George, spreading to Port Alfred in the evening. High seas, with wave heights of 6 to 9 m are expected between Lamberts Bay and Port Alfred, with very high seas of wave heights between 9 to 13 m expected between Slangkop and Port Alfred. The coast between Cape Columbine and Plettenberg Bay (Western Cape) can also expect storm surge, which may lead to further coastal infrastructure damage and beach erosion.

These adverse weather conditions may do considerable damage and pose grave danger.

Gale to strong gale force winds may result in damage to coastal infrastructure, beach erosion and difficulties for boaters and fishers. Disruption of harbours and ports as well as beachfronts can be expected. Medium to large vessels will be at risk as a result of dragging of anchors.

Gale to strong gale force winds over the interior could lead to damage of formal and informal settlements. Falling over of trees is likely to affect properties and road travel. Increased travel time is likely and high sided vehicles are at risk of falling over as a result of crosswinds particularly on the N1, N2, N7 and R60. Strong north-westerly winds over the interior may fuel runaway fires over the Eastern Cape.

Due to saturated ground from the past few days’ rainfall, further rainfall is likely to lead to flooding of roads and informal settlements, which may lead to damage of property and displacement of vulnerable communities. There is also a risk to life due to fast moving streams, damaged roads and low bridges. Disruption of traffic is likely, as well as increased motor vehicle accidents. Vulnerable areas are likely to experience disruption to essential services.

Alerts issued by the South African Weather service can be seen in figure 2 below. 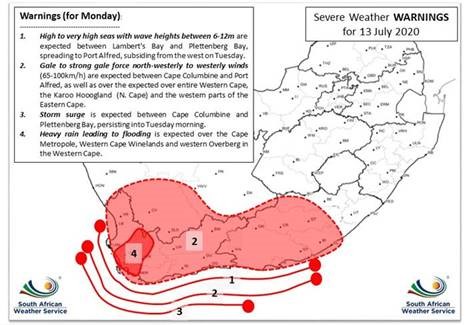 Cold to very cold conditions are expected over parts of the Western Cape and Northern Cape on Monday, spreading to the remainder of the country on Tuesday and Wednesday. Minimum temperatures are expected to plummet significantly, with widespread frost predicted for Wednesday morning, 15 July 2020, across the central interior of the country: northern areas of the Eastern Cape, eastern areas of the Northern Cape, extreme southern areas of the North West and Gauteng as well as the Free State.