Cathy Avierinos of Hilland Environmental, the environmental consultants on the project, says the development is taking the visual impact into account in order to limit the disturbance.

An architect's rendition of the housing being planned on the property.

GEORGE NEWS - Plans to build on a property on the banks of the Kaaimans River near the river mouth and railway bridge are receiving some opposition.

The 1 671m² property, portion 36 of Farm 195, was recently acquired by Carl Ahlstrom and Rod Hossack of Donegal Deck Pty (Ltd). They are proposing to build a main dwelling and two separate guest rooms, totalling an area of about 351m².

Another property owner in Kaaimans, Peter Lilienfeld, has started a petition against the development and has raised concern about how access is to be gained to the property and the visual and ecological impact of the proposed dwelling.

"It will be slap bang at the centre of one of South Africa's most iconic views, at the mouth of a fragile estuary. Once a house has been built, the owners would need to establish structures in the tidal zone providing access, even during high tides, storm and floods. They will have to use the estuary mouth, in contrast to the upriver houses that reliably have water of sufficient depth to use boats," says Lilienfeld.

He refers to policy guidelines in the George Municipality's spatial development framework that mention Kaaimans River Corridor as a "significant natural and rural landscape to be preserved as a distinctive gateway to and from the George city area".

Cathy Avierinos of Hilland Environmental, the environmental consultants on the project, says the visual impact of the proposed home will be much the same as all the other homes that have been built along the Kaaimans River and those still to be built on the vacant properties along the river.

According to Avierinos, the development is taking the visual impact into account in order to limit the disturbance. "Comments received during the commenting period on the Osca permit application have informed the proposed design and aesthetics and the George Municipality will ultimately approve the aesthetic design of the home," she says. 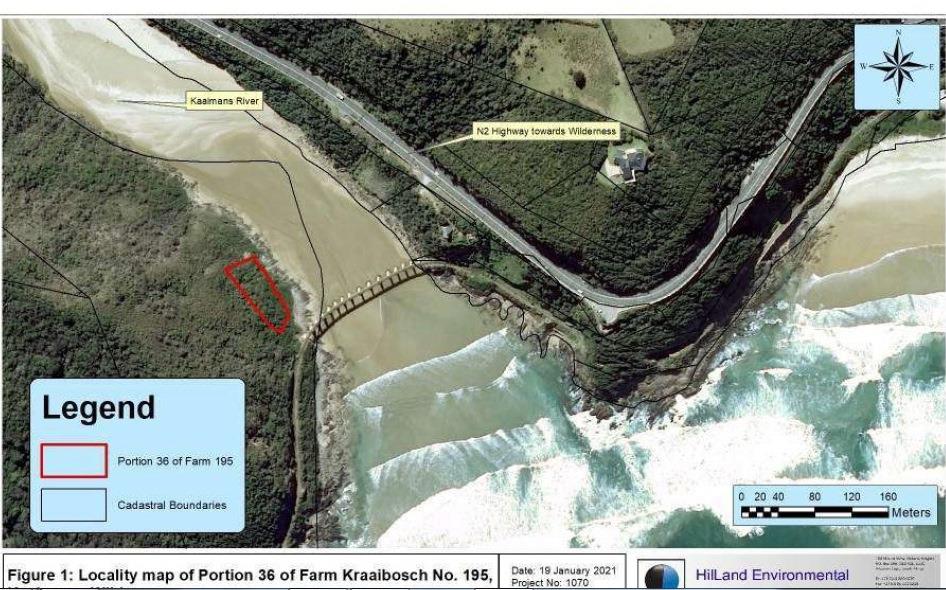 An application to build a home on portion 36 of Farm Kraaibosch 195, near the Kaaimans bridge, was received by the George Municipality. According to the application documents, the plot is 1 671m² in size and the development will comprise 351m². Solar power and rainwater tanks will be installed.Transport of construction material
Parking for the property is at the Kaaimans River like all the other homeowners living on the river bank. "Because the mouth is not always open, the owners of portion 36 will have to walk to their property like all the other beach users. Construction material will be either walked to the site following this same route, or will be carried along the railway line from Victoria Bay."

No structures are proposed for the water's edge (in the tidal zone). "There will most likely be a small boardwalk from the lower part of the property leading up to the home in order to prevent damage to vegetation by foot traffic. This will have no impact on the ecology and natural flow of the estuary."

According to Avierinos, the proposal is not going against the George spatial development framework guidelines as stated by Lilienfeld. "The property has a primary right to build a home just like any other erf in George or Wilderness or further upstream on the Kaaimans River. There are six vacant properties still along the Kaaimans River that will be built on in future, of which portion 36 is one. The entire structure is proposed to have as little impact on the vegetation as possible and construction will be undertaken under strict guidelines as set by the George Municipality with inputs from SANParks and Forestry."

Ahlstrom says the George Municipality has recently removed a vagrant hippie community from the property who were squatting there illegally. One of them was caught red-handed, clearing a walking trail with a machete.

"The property has been disturbed already. In 1928 it was the laydown area and factory during the construction of Kaaimans bridge. It was sold to a private owner after completion of the bridge and handed down to various owners over the years. We are the fourth owner. It is a special property and we want to do something special there. It is currently in a bad condition, but we aim to rehabilitate it," he says.

The Surveyor-General information shows that the property was set out in 1930.

A Kaaimans resident, Anton Heyn, says owners who follow the legal procedures to obtain approval are welcome to exercise their rights. "I have faith in the authorities to ensure that whatever happens will be positive for the area."

Monica Vaccaro from the Landmark Foundation says she is concerned about the "iconic" view that will be affected. "That area is part of our natural cultural heritage."

The policy guidelines in the George Municipality's spatial development framework (SDF) referred to by Lilienfeld in his objection, include the following:

• The Kaaimans River Corridor and the rural landscape to the north of the N2, between this and the proposed new N2 alignment, up to the eastern urban edge of George is also considered to be a significant natural and rural landscape to be preserved as a distinctive gateway to and from the George city area.

• Scenic landscapes and features must be safeguarded.

• Scenic routes provide public access to the enjoyment of these landscapes. The routes and the land use alongside these routes should be managed in such a way as to not compromise the views offered but to mark and celebrate the landscapes and the origins or nature of their significance.