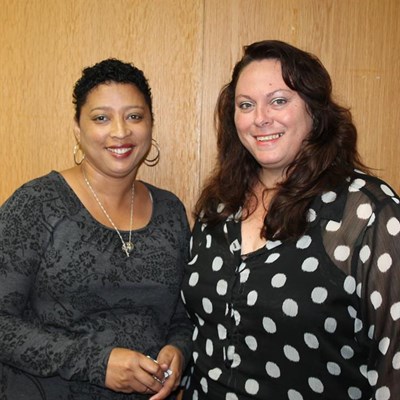 The local officials who run the support component of the directorate housing settlement George office are Avril Fillies-Mopp (left) and Lynette Avenant. Photos: Myron Rabinowitz
GEORGE NEWS - At a Rental Tribunal sitting in George on Monday 24 November Arno Botha, chairman of the Western Cape Rental Housing Tribunal, said, "For some unknown reason the people of the Southern Cape who need our services are not coming forward to make use of them."

The tribunal offers a free service to provide mediation to settle disputes between tenants and landlords.

"In this area we interact with the very wealthy. The people from The Heads in Knysna and those in the Wilderness area contact us regularly.

"We encourage those who have finance issues to come forward so that we can resolve disputes that arise due to unfair practices."
Fellow board member Igshaan Higgins said the tribunal sits in the Southern Cape once every three months.
"There just aren't enough cases to warrant us coming to the area more regularly."

In response to the question regarding price fixing of rental accommodation Higgins said, "The tribunal does not have the jurisdiction to deal with the issue of price collusion.

"We suggest that those who believe that it is applicable refer the matter to the Competition Commission for investigation."
The tribunal was formed in 2001 and comprises of five members, appointed by the provincial minister of human settlements.
Each member has expertise in property management, housing development and consumer matters pertaining to rental housing.
The tribunal is assisted by the support component of the directorate housing settlement. Two officials, Avril Fillies-Mopp and Lynette Avenant, are stationed at the provincial offices in York Plaza (SARS Building) in York Street. The officials are the local representatives of the administration and can provide mediation between the parties in terms of the Rental Housing Act.

Fillies-Mopp requests that the parties in dispute contact them on 044 805 8730/63 so that they can attempt to resolve the issues before it goes to the tribunal.

"We can make recommendations to the relevant stakeholders which will save the parties a fortune in legal fees."
Avenant said they try and conduct the hearings and mediations as close to the point of complaint as possible. "The issues must be resolved in 90 days."