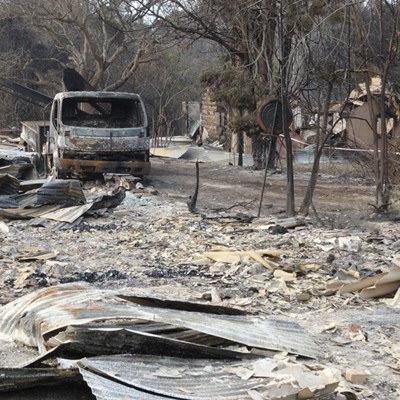 Damage caused by fire.
WESTERN CAPE NEWS - The Western Cape Department of Agriculture is assessing damages to the agriculture sector caused by the recent fires in the Southern Cape.
In a move to mitigate the economic impact of the fires on agriculture, R5,5-million has been allocated by the Western Cape Government to the sector, which will be used primarily to rebuild lost infrastructure, and for animal feed.
Minister of Economic Opportunities, Alan Winde, said, "We have a team on the ground in the Eden District, going from farm to farm to assess damage due to fire. Our officials are working with municipalities, national government departments and organised agriculture, to ensure a comprehensive analysis and response plan.
A key challenge is around sourcing fodder to replace the burnt-out grazing land. Due to the drought, there is currently a shortage of animal feed in the province. We are in the process of sourcing feed from other provinces. My key concern is that we limit the economic impact of the fires on important sectors like agriculture.
The drought is already placing strain on this sector; we cannot afford to lose more jobs. Farmers and people working in agriculture can contact our team in the Eden District to register damage, and the need for an assessment to be completed."
The Department's team in the Eden District can be reached through Clyde Lamberts, District Manager, 2nd floor, York Park Building, York Street, George; or by phoning him on 044 803 3757 or 081 252 4324; or e-mailing him at clydel@elsenburg.com. Alternatively, phone Christa Weber, administration on 044 803 3748 or e-mail her at christaw@elsenburg.com.
'We bring you the latest Garden Route, Klein Karoo, Hessequa news'