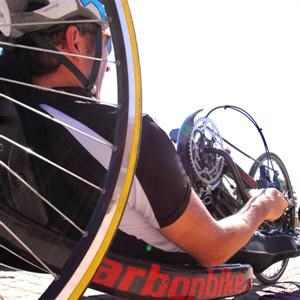 Swiss athlete Albert Marti will be taking part in this year's OCC.
GARDEN ROUTE NEWS - With over 800 entries, this year's Outeniqua Wheelchair Challenge (OCC) promises to be the biggest event thus far.

The OCC, which is now in its ninth year, kicks off tomorrow morning at 08:00 in George. The starting point for the event is the Mountview Resort at the bottom end of York Street.

Organisers are hoping that when the race begins tomorrow morning, crowds of spectators will line York Street - not just to watch the 42.2km, 21.1km and 10km races, but also to cheer on the 670 wheelchair riders being pushed by 670 volunteers. Popuar South African rugby personality, Chester Williams, will be one of the volunteers.

Among the new international entrants are Albert Marti from Switzerland and Mark Rohan from Ireland. They join Kenny Herriott of Scotland and Nikki Emerson of England, who were both prize winners last year, and South Africa’s Ernst van Dyk, a world class athlete who has competed in the OCC every year since 2002.

The OCC is a Paralympic marathon qualifier and is recognised as an official Championship event by the SA Sports Association for the Physically Disabled (SASAPD).

Please note that York Street will be closed from 06:00 tomorrow morning.