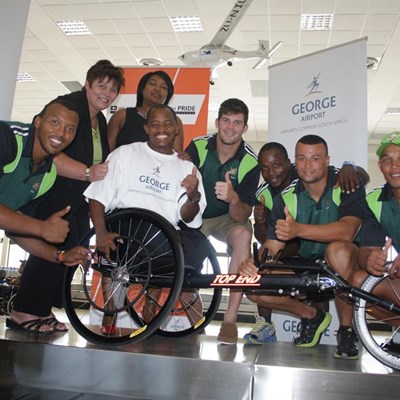 Gerrit Hendricks on his custom-made racing chair with Ansie Swart, main organiser of the OCC (back left) and next to her, George Airport Manager Brenda Vorster, the main sponsor.
GEORGE NEWS - Southern Cape wheelchair athlete Gerrit Hendricks will be racing in the Outeniqua Wheelchair Challenge (OCC) this year on a brand new, custom-made racing chair worth R100 000, sponsored by Acsa, George Airport.

Gerrit reckons the feather light chair of 6kg, ordered from the US, will enable him to improve his time by 10 to 15 minutes.

He is aiming to take the laurels in the T54 marathon, but is rather modest about it. "I'm very positive, but I also don't want to jump the gun.

"I have a love-hate relationship with the OCC. I won a few halfmarathons in the event, but the other times there were some glitches during the race.

"It becomes a very psychological thing and your mind starts telling you about all the things that can go wrong."

Last year he was the favourite in his category, but after having some trouble with his chair, came fourth, "which is not good enough", he states emphatically. It was his fourth full marathon.

During an interview at the George Airport where he was handed his new equipment, he explained that his "little superstitions", which made him wear the same clothes for each and every big race, will have to be nipped in the bud as he will be donning a brand new outfit for the 2013 race, also complements of Acsa.

Gerrit has participated in the OCC every year since its inception 11 years ago. It is the OCC that has steered him away from a life of partying onto a strictly disciplined path which is taking him places.

He has been overseas six times, participating in marathons in New York, London and Portugal. "The most gruelling event is the New York marathon. It starts with a 2km uphill and from there it is up and down all the way. And the weather is extremely cold."

He used to ride one of world champion Ernst van Dyk's old cycles and later also received a racing chair from the Challenged Athlete Foundation from the US. "But this new model is on a whole different level," he says, flashing a contented smile.
See him in action at the OCC in George on 16 February. Gerrit Hendricks on his custom-made racing chair with Ansie Swart, main organiser of the OCC (back left) and next to her, George Airport Manager Brenda Vorster, the main sponsor. A few Eagle rugby players were there to cheer Gerrit on. From the left are Lubabalo Mtyanda, Grant le Roux, Mzoxolo Dyatyi, Lindon Hartnick and Elshaun Bok. The Eagle team will be pushing people in wheelchairs in the 5km fun event at this year's OCC.