Raymond Auerbach with a solar-powered water pump, Anastasia Caude (French post-graduate student) and Ian and Natasha Strydom, who installed the solar water heater, tanks and garden beds. The irrigation pump that pumps bathwater onto the garden can be seen bottom right.

GEORGE NEWS - Having moved from KwaZulu-Natal to George seven years ago, I set up research projects into water efficient organic farming systems for Southern Africa at the Nelson Mandela University George Campus, where I teach soil science and plant production.

My doctoral research in KwaZulu-Natal in the nineties showed how to reduce irrigation requirements using rainwater harvesting techniques, and how to improve water use efficiency.

When I first spoke publicly in George at the Education Summit in 2010 just after the last drought, I predicted a minor drought in 2017 and a major drought in 2024.

Three years ago, Christina and I moved into a new home in George and we decided to work out on a small scale how water could be used efficiently while maintaining a comfortable lifestyle and producing healthy organic food on a small scale.

Energy efficiency was also to be part of the mix, and we decided that we wanted to keep the swimming pool as well.

We needed a low-maintenance, easy-to-manage system.

The house already had two 2 500-litre tanks around the back and a small electric pump.

During the first year, we put in a more efficient electric pump and last year a third tank, which immediately meant that the pool could be topped up with rainwater.

This year, we set up the new vegetable garden (in raised beds, as we are neither of us growing younger!), put in a solar water heater and connected the whole garden to a bathwater irrigation system using the new pump.

We put in a fourth, smaller (500-litre) tank in the front, where it also had to look good.

The vegetable garden is also aesthetically pleasing, and far more labour-efficient than most gardens, as well as being water-efficient.

The gardening work, together with our bicycles and swimming pool, gives us just enough exercise to help us avoid paying an expensive gym membership!

The system is fairly simple, but had to evolve organically: a small pump fills the solar water heater with rainwater, which is then heated by the sun.

When I come home from the university, I fill up a luxurious bath with solar-heated rainwater, and enjoy a good read while de-stressing. 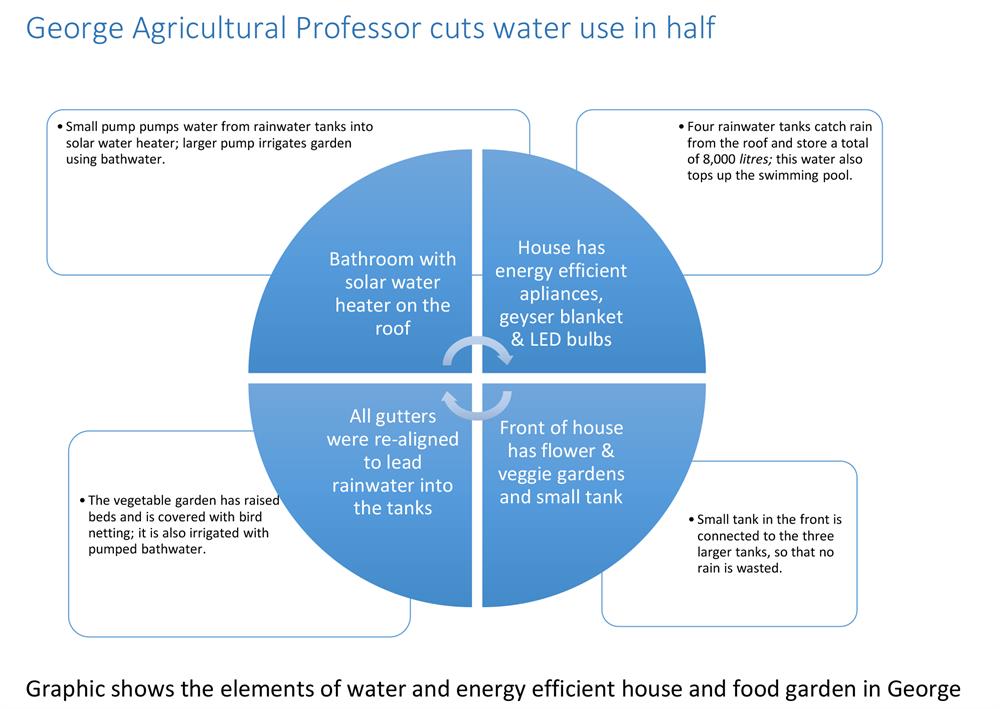 Next morning, once the water is cool, we draw a couple of buckets out of the bath for flushing toilets and then irrigate the veggies and the flowers with the bathwater, with one flick of a switch.

Given our roof area, a 10mm-rainfall generates more than 5 000 litres, so with a couple of rainy days all of our tanks fill up (total storage of 8 000 litres), and this is enough for about three months of careful use.

The worst scenario was having to cut back to three baths a week when the tanks were low.

What are the actual benefits?
The water consumption records show that before we moved in, average monthly water use was 18kl; when we moved in we were able to reduce this to 17kl per month (we still have to wash sheets for the holiday home we rent out).

In the six months that the rainwater harvesting system has been operating, our average monthly consumption has been 7,5kl. Electricity use has also declined by about 20%.

With penalty tariffs, if we had been using 18kl per month, this would have cost us more than R800 extra in water bills per month, so we are saving about R5 000 per year, plus about half of that for electricity.

The total cost of our system (installed) including the actual cost of all the tanks and pumps which we inherited with the house, has been about R37 000 over the past three years.

It will take us a while to recoup the cash investment, but we do not think that water or electricity prices are going to decrease anytime soon, and we also believe that every South African should be using resources consciously.

An additional set of benefits has been the pleasure we take in our garden and our water system, and our feeling that we are part of the solution, rather than being part of the problem in building a new, more sustainable South Africa.

With German funding we are now looking at urban gardens here, in Limpopo Province and in Dar es Salaam, and their role in addressing climate change and food security.

We hope to find funding to continue this work after my retirement towards the end of this year, and we have developed a proposal for a Chair of Agro-ecology, Organic Food Systems and Environmental Education, working with the Garden Route Botanical Garden's environmental education centre on a schools river health programme for greater George, and continuing the organic research and work on food security.