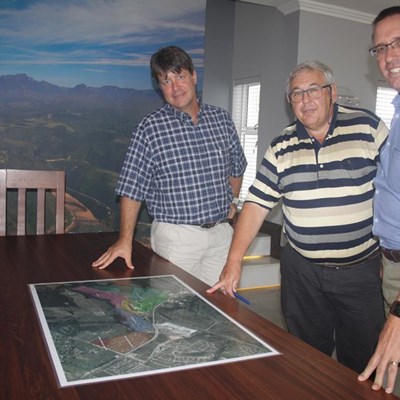 The team involved in the application for the new Mediclinic George. From left are: Arno de Vos, Fred de Kock (landowner and developer) and Henri Jonck. Photo: Alida de Beer
GEORGE NEWS - The period granted for members of the public to comment on the environmental aspects of the application for the proposed new Mediclinic George has come to an end.
Fred de Kock, owner of the land earmarked for the development, confirmed last week that they are busy with the application in terms of the Land Use Planning Ordinance (Lupo). He said the comments are being studied by their professional team so that they can give feedback and amend the plans where required. Once this process is completed, a rezoning application with the George Municipality will be initiated.
Mediclinic announced in August last year that it wants to develop a new R500-million hospital, incorporating the Geneva Clinic and a doctors' block, to replace their existing 30-year-old facility that will soon be inadequate to accommodate the growth of the region.
More than eight hectares adjacent to the Outeniqua Farmers' Market and old sawmill buildings northeast of the Garden Route Mall have been identified for the hospital. De Kock is positive that this particular location is exceptional in the light of Mediclinic that wants their new facility to serve the whole region and provide space for the next 40 years.
A full medical hub is being planned with services like a day hospital, new specialist units, a step-down facility, frail care, doctors' block and rehabilitation centre. There is also interest from various medical related service providers for space.
In preparation of the development, the decommissioning of the sawmill and removal of harmful waste were completed at a cost of more than R3-million. A heritage study has also been done. "Our proposal is that the architecture of these buildings be acknowledged and repeated in the new development. We give the assurance that we will act in the best interest of the broader community," said De Kock.
At the moment parts of the sheds are used for informal job creation.
Chantel Edwards-Klose, George Municipality media liaison officer, said the property will have to be rezoned to institutional use in order to accommodate a hospital. "The subject property currently falls outside of the urban edge, and the consideration to extend the latter will be part of the assessment of the application."
De Kock foresees that the Outeniqua Farmers' Market, in which he has a stake, will be strengthened by the development. In the next six months, terrain earmarked for additional parking will be levelled and grass planted. "Eventually, we would like the market to trade during the week with a permanent tea garden and nursery. It will become a more tourism driven amenity," he said.
Deon Mocke, owner of the Outeniqua Farmers' Market, welcomed the proposed development. "It will have a positive effect on us. The market is five years old this year and going strong. In January alone we received more than 80 new applications from potential traders, compared with the usual five to 10 per month."
De Kock, who has invested heavily in the local economy, is also the developer of Kraaibosch Manor, Kraaibosch Retirement Village and Welgelegen consisting of more than 800 residential stands to date. He has spent more than R65-million in capital contributions towards George Municipality, and the development of roads and the infrastructure master plan.
He pointed out that extensive residential expansion north of Kraaibosch and the proposed hospital area is on the cards in the near future. "Many residential erven have already been approved. This will lead to an extended road network taking shape northwards in order to serve these developments."
Concerns about the effect of the hospital's move on small businesses, restaurants and doctors in the CBD were raised last year when the announcement was made. De Kock says Mediclinic has been approached by various parties who are interested in the existing premises.
Mediclinic George Manager Kassie Karstens did not want to divulge details regarding potential buyers, but confirmed that there is interest.
Click here for previous articles:
• New R500-million Mediclinic George
• Specialists need proximity to hospital
ARTICLE AND PHOTO: ALIDA DE BEER, GEORGE HERALD JOURNALIST
'We bring you the latest George, Garden Route news'
Posted on: 10:00 Thu, 25 February 2016
Your Comments