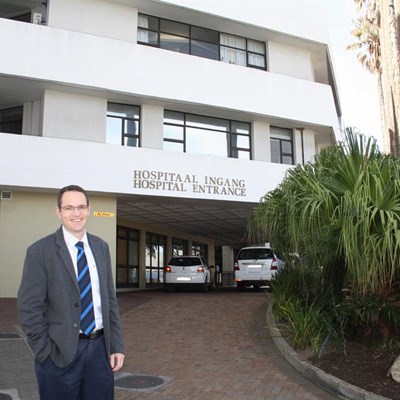 Kassie Karstens, manager of the Mediclinic George in front of the current premises.
GEORGE NEWS - The medical hub that has developed around Mediclinic George in Gloucester Avenue over many years is a tremendous asset for the city of George and, more specifically, for the central business district (CBD). This is not only in terms of the spin-off it creates for business, but also the enormous property value it adds to the area.
According to urologist Dr Johann Bahlman, specialists have to be close to the hospital and it can be expected that most of them will want to move, where possible, to be near the new Mediclinic on the eastern edge of George. His own long-standing practice is situated in Varing Avenue near Geneva Clinic. "It is necessary to be nearby, especially if you have to do a lot of theatre work. In the case of an emergency, you can just walk over to the hospital. The problem is doctors who are long established and have bought property in the vicinity of the current hospital premises. They will have to sell."
He agreed that Mediclinic's decision is wise in light of a growing need for medical services. "You have to look at the bigger picture. Mediclinic is caught up in the middle of town, parking is a nightmare and space for expansion is limited."
Local property guru Tim Kirby was asked to predict what would happen to property value if most of this medical core moves away. "It is a bit of an unknown quantity at this stage, but I think people must not get uptight," he said.
"Mediclinic has said that it will be careful in how and to whom they will sell the building. It is a well-situated, prime area with a lot of retirement homes and frail care centres around it.
"I do not think that if everybody moves out, it is going to have a negative effect on property value because the area has been so well developed in the medical sphere and is of a high standard. The current owners are not just going to dump their buildings, because the move is going to cost them."
Kirby foresaw that it is going to be a gradual move and there would eventually merely be a change in the nature of services supplied in the CBD.
Exciting long-term prospects
Innis Erasmus, of Pro Physio Inc., is very excited about the long-term prospects of the move because of the ever-increasing demand for medical services.
He said parking space at their practice in Trefoil Square has become a growing problem. "Property owners in the central part where the medical Mecca is located, may feel that their value might be reduced, but I foresee that another hospital group will make use of the opportunity to move into the current Mediclinic building, if the latter is not going to manage it themselves."
PathCare 'will adapt'
Pathologist Dr Ryan Soldin, of PathCare, who operates from their own building in Gloucester Avenue, said they do not have plans to sell as it would be possible to split the 'hot' work (emergency) section in their laboratory from the 'cold' (not so urgent) work. Work done for the intensive care unit and emergency centre would have to move to be near the new hospital. "PathCare is the first and largest laboratory in George and we will adapt to the needs of the George community. If they require services at the new hospital, we will be there."
He said the move could be a positive for the broader George community, but Mediclinic will have to take the needs of established doctors who have served Georgians for decades into account in the process.
Separate owners in Mediclinic
According to Mediclinic Manager Kassie Karstens, 17 medical practitioners, including physiotherapists, own rooms in the Mediclinic building. "We will definitely try to get the best deal for them when we sell and we will assist them where possible. The body corporate's day management will meet soon to discuss this."
One of these doctors is Waldo Scribante, who owns the rooms where his radiology practice is located. He told the George Herald that it was too early to comment. Outeniqua Oncology also said commenting now would be premature and the implications of the move will first have to be thoroughly considered and discussed with the doctors involved before any decision can be made.
General practitioners
For general practitioners the relocation of the hospital is not as critical. Dr Dawie Augustyn, chairman of the general practitioners' association, said George is fast turning into a big city and more hospital beds are needed urgently. "Mediclinic has wanted to start a cardiac unit, but has been constrained by space. An additional unit would also mean more new doctors and more traffic."
A patient of his recently had to wait three days to be admitted to Mediclinic because of a shortage of beds.
One of his partners, Dr Honey Ferreira, said they are excited. "We are the lucky ones. We have been on the edge of town, but we are now moving to the centre."
The third partner, Dr Jakobus de la Batt, said a thought should be spared for doctors on the other side of town such as Blanco. "For them a hospital in the east means more time-consuming trips when following up on patients in hospital."
Mediclinic move a 'tragedy' for George.
R500-million Mediclinic George.
ARTICLE: ALIDA DE BEER, GEORGE HERALD JOURNALIST
'We bring you the latest George, Garden Route news'
Posted on: 12:09 Thu, 27 August 2015
Your Comments