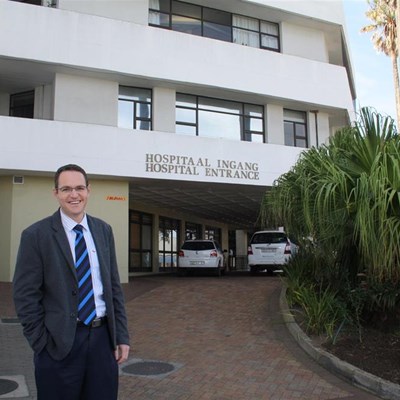 Mediclinic George manager Kassie Karstens says the decision to move away from the CBD was 'not an easy one'.
GEORGE NEWS - The development of a new, state of the art hospital for Mediclinic George near the old sawmill at Kraaibosch to the northeast of the Garden Route Mall, was announced last night.
This project is still subject to the necessary rezoning and approval by local government, province as well the Department of Health.
According to Mediclinic George Manager Kassie Karstens, the development, in excess of R500-million, will enable the hospital to provide in the fast growing demand for medical services in George and the Southern Cape. It will incorporate the Geneva Clinic, as well as a separate doctors’ block.
It is foreseen that building work will start next year once rezoning and licenses are obtained from the authorities, with planned completion of the project in 2018.
Medical practitioners and other interested parties were officially informed of the new development at a meeting hosted by Karstens in George last night (Wednesday), after the George Herald had gone to press.
Effect on CBD
The move is likely to have an economic effect on several businesses in the central business district (CBD) and in a pre-announcement interview Karstens told the George Herald that the decision to move was “not an easy one”.
“Mediclinic is going all out to ensure that the future occupants of the building will be a great asset to George.
“We are committed to the wellbeing of the whole of George and entire region and will not leave the CBD in the lurch.”
He said the new development was finally approved by Mediclinic’s international exe-cutive committee after various planning attempts over the past five years showed that refurbishing and expanding the current faci-lity would be unworkable and not economically viable.
“The hospital was designed and built 30 years ago and the set-up has become extremely difficult. It will soon be completely inadequate at the current growth tempo of the region.
“Because of the size of the hospital we needed five hectares and believe that this area, also known as the gateway of George, is ideal.”
Karstens said the investment is a long-term one and they needed to plan ahead for the next 30 years.
“At the end of the day we have looked at what is best for the patients, and that made the decision much easier. We strongly believe that this is the best option, not only for George, but for the Southern Cape region as well.”
Whether doctors and business people will share this sentiment remains to be seen. The landmark flower sellers on York Street rely on family and friends who visit patients for a large percentage of their turnover and the same applies to the surrounding coffee shops, bars and restaurants.
The chemist at Mediclinic George, which is independently owned, also stands to lose a lot of trade. Depending on what comes in the place of Mediclinic George, the move may also have an effect on the value of the surrounding real estate.
The reaction from the medical fraternity, business, the municipality and other role players, together with the envisaged effect on the CBD, will be published online and in the George Herald newspaper next Thursday.
Committed to George
Karstens said during the construction period of the new facility, normal maintenance at the current hospital will continue. “The carpets in all the wards and reception are to be replaced within the next two months.”
He said at the moment patients have to be transported between doctors’ rooms and the two hospitals for specialised services such as X-rays and MRI scans.
“At the new facility this will no longer be necessary. The hospital will feature ‘green’ attributes such as water tanks and heat pumps. Ultra-modern theatres will be equipped with the latest multimedia with real-time wireless connection to doctors’ rooms, and patients will be accommodated in more spacious rooms.
“The facility will be situated right next to the N2 and we hope to make special provision for a bus stop for the Go George bus service to ensure accessibility for patients.”
Karstens said Mediclinic International’s investment in George is a compliment to the community, doctors and local government. “It will open up opportunities and attract more doctors and specialists who are looking to move to the Southern Cape.”
About 70% of the current building is owned by Mediclinic South Africa while some
medical practitioners also own rooms in the building.
Medical practitioners own most of the properties located around the hospital in Gloucester Avenue and might also have to move to Kraaibosch to be near their patients. The Neuro Clinic will stay where it currently is and is being completely revamped.
The announcement follows two other recent Mediclinic developments in South Africa - Mediclinic Gariep in Kimberley in the Northern Cape and Mediclinic Midstream in Midrand, Gauteng.

The new Mediclinic George will be designed along the same lines as the new Mediclinic Midstream
in Midrand (above), between Johannesburg and Pretoria.
ARTICLE: ALIDA DE BEER, GEORGE HERALD JOURNALIST
'We bring you the latest George, Garden Route news'
Posted on: 08:05 Thu, 20 August 2015
Your Comments