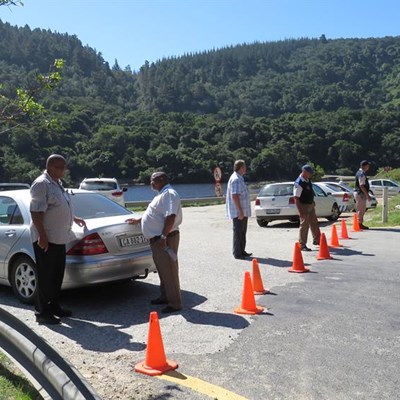 Law enforcement officials on Wednesday ensured that the 'no access' policy was obeyed. The ban on swimming was lifted 24 hours later, on Thursday.

GEORGE NEWS - People with open wounds are warned not to swim in the Kaaimans River, or any local estuaries.

An environmental health warning issued on Thursday during a press briefing held at the Eden District Municipality's headquarters in York Street, George, stated, "Infections may occur when open soft tissue wounds are exposed to warm estuaries."
This environmental health warning was issued to inform the public as to what measures to take to protect themselves against exposure to the bacteria Vibrio vulnificus.
Death an 'Index case'
This bacteria was identified as having caused the death of an elderly Wilderness Heights resident, Frans Heunis (81) last Friday.
Heunis went for a swim last Monday 1 February in the Map of Africa section of the Kaaimans River. He cut his right shin while swimming. He was treated for the cut, but became ill and lapsed into a coma.
As a result of his death, water samples were taken at Kaaimans River and sent away for testing. The results are being awaited.
At the briefing, leading George physician, Dr Stephen Hardcastle, said the death of a local man is regarded as an 'Index case', being the first case of its kind recorded in this region. It is not a notifiable disease.
Upon being informed, Eden DM environmental health officials sprang into action, testing the water in the Kaaimans River. Eden Manager: Municipal Health & Environmental Services, Johan Compion commission a series of water tests and, as a precaution, the Kaaimans River picnic area was closed to the public on Wednesday.
Kaaimans reopened
The area (adjacent to the N2) was however, re-opened the following day, upon the advice of Dr Hardcastle who indicated that the possible presence of bacteria should be treated similarly to the Red Tide incidences in the Knysna Estuary. The public is usually warned about its presence and told not to eat any shell fish for possible contamination.
His viewpoint was supported by Dr Dalene Brink, of Pathcare, an expert on bacteria.
Dr Brink said Vibrio vulnificus is a bacteria that occurs naturally in all rivers. It is however, high temperatures that cause it to become more harmful - but only to humans who have an open wound or scratch. Hence the warning to cover all open wounds when swimming. "The bacteria is harmless if you get the river water into your eyes or even swallow it."
The EDM said in their press release, "Vibrio vulnificus is a bacterium found naturally worldwide in warm coastal waters. It rarely causes diseases. There is no association with sewage contamination."
Kaaimans pristine
Clive Africa, EDM's executive manager of Community Services said, "The Kaaimans River is in a pristine condition. We do not want to spark of any panic."
But shell fish collectors are nonetheless warned not to eat raw or undercooked shellfish, particularly oysters harvested from warm waters. They should also wear gloves and disinfect boards and knives used for seafood to avoid cross contamination.
Chronic patients
The press release states, "Persons with underlying medical conditions, any chronic condition especially liver disease and diabetes, may be at increased risk of serious infection. Infections are seasonal and 85% occur in the summer months. Transient environmental factors such as warm water and moderate salinity can increase the number of Vibrio vulnificus in shellfish.
Infection may occur in a pre-existing wound and cause soft tissue infection with severe pain or diarrhoea, vomiting and abdominal pain. Any of these symptoms need medical attention.
Beaches safeIn the presence of officials of SANPArks, CapeNature, Eden officials and Dr Terence Marshall of the Western Cape Health Department, Clive Africa said the public would be kept abreast of further developments. It was confirmed that the bacteria dies in seawater where the saline content is high. It is therefore considered completely safe to swim at local beaches like Victoria Bay and Leentjiesklip.
Compion confirmed that to monitor the situation, special water tests will be done on all estuaries and rivers in the Eden District. The monitoring action will be carried out from the Gourits River mouth and will stretch to Nature's Valley in the East. Compion said that the typical habitat of the bacteria is where sea water and fresh water meet, where the saline content is diluted and the water temperature rise above 20 degrees celsius.
Clive Africa (left) and Vernon Gibbs-Hall at the entrance to the Kaaimans River Mouth recreational area on Wednesday when it was closed to the public and water samples were taken.
On Thursday Dr Dalene Brink, a local expert on bacteria said Vibrio vulnificus, a bacteria found naturally worldwide in warm coastal waters is more virulent when water temperatures rise. With her are Eden Councillor Henry McCombi (left) and Eden DM Acting MM Clive Africa. Photo: Pauline Lourens
Click here for previous articles: