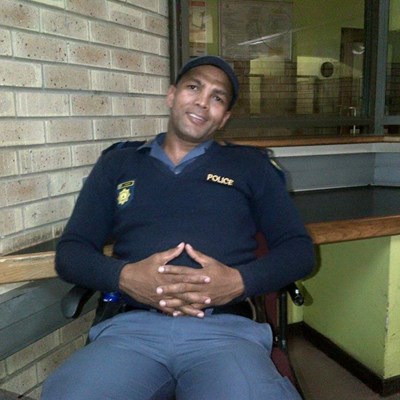 Constable Trevor Lindoor was shot twice on 18 June while on patrol in Thembalethu. Last week police arrested a suspect in connection with the shooting.
GEORGE NEWS - A visit to an Eastern Cape hospital for a gunshot wound to the buttocks led police to the man suspected of shooting Thembalethu policeman Trevor Lindoor (35) on 18 June in George.
Constable Lindoor was shot twice - in his chin and upper right arm - while on patrol with a colleague when they stopped in 34th Street in Zone 7 after noticing a suspicious looking man.
The constable returned fire and supposedly wounded the suspect, Mvuyisi Nomnganga (27), in the buttocks. He was arrested in his home town Tsomo, situated between Queenstown and Mthatha, last Friday after police positively linked him to Lindoor's shooting. He appeared in the George Magistrate's Court on Monday on charges of attempted murder.
The case was postponed to 13 August for a formal bail application.
According to Captain Malcolm Pojie, Southern Cape Police spokesperson, information received from the community took the investigating officer, Detective Constable Thembikile Mathwa of the George detective branch, first to Frere Hospital in East London where Nomnganga received treatment for a gunshot wound to his buttocks.
"On arrival he learnt that the suspect had discharged himself and had gone back to Tsomo," said Pojie.
Linked to other crimes
Pojie says Nomnganga remains in custody for further investigation that seeks to link him to other crimes that were committed in the Southern Cape.
"He has already been linked to at least two armed robberies that occurred in Blanco and Pacaltsdorp during May and will thus face further charges of armed robbery and possibly carjacking.
"We will do everything in our power to oppose the bail application."
Related articles: