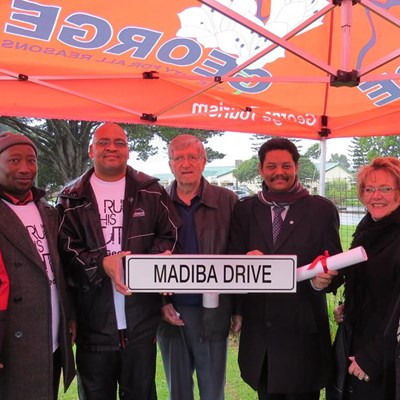 At the ceremonial handover of the approval to rename Saasveld Road to Madiba Drive last Saturday: From left are Peter Noble of George Municipal Corporate Services, Guildford Sihoyiya, George councillor, George Mayor Charles Standers, Chief Whip and Chairperson of the Homage Committee, Flip De Swardt, NMMU Campus Principal Quinton Johnson, Portfolio Councillor for Community Safety Iona Kritzinger and Ward Councillor for Ward 8 Gert Niehaus.
GEORGE NEWS - Saasveld Road's name change to Madiba Drive is official. All approvals required for this transformation - both by the local council and provincial government - have been obtained.
The official response letter from George Municipality on this widely criticized request from the Campus Principle of Nelson Mandela Metropolitan University Prof Quinton Johnson was hand over on Mandela Day last Saturday, during a ceremony at the University Campus in Saasveld. Johnson received the letter from Chief Whip de Swardt, Chairperson of the Homage Committee.
Since months before George Municipal Council resolved to rename Saasveld Road to Madiba Drive in October last year, various NMMU students, lectors and residents, as well as members of the George Heritage Trust voiced their resistance to the proposed name change.
"Their is so many people that are against the name change," said Philda Benkenstein, chairperson of the George Heritage Trust. "There is even a facebook page started by the students to voice their opinions."
In a letter to the George Herald Benkenstein names two other reasons why the Trust opposes the name change: "The name Saasveld is part of the positive image of George and is known countrywide as an academic plus for George, a centre of excellence. Also, there is already one extended major traffic artery named after President Mandela, being Albert Street and Sandkraal Road."
According to Joh Groenewald, a member of the trust, the whole exercise was a propaganda gimmick.
"They are trying to cover a series of bad decisions. "No proper public participation process was ever done." This accusation has previously been disputed by De Swardt, who maintains that all correct procedures took place.
During the handover of the official letter on Saturday, Johnson read it aloud to the group gathered.
"It is an historic moment for the university and one which allows for a connection with the community in a symbolic and powerful way," said Johnson.
"The university is developing the rich tradition and history of the area and the renaming strengthens the bond to the City of George and the George Municipality – keeping the town and tradition strong."
George Mayor Charles Standers indicated that the official renaming will take place at a later date. Affected citizens and businesses along Saasveld Road will be given a grace period until 28 February 2016 to change their details and signage.
Read a previous news flash: Saasveld Road to become Madiba Drive
ARTICLE: MICHELLE PIENAAR, GEORGE HERALD JOURNALIST
'We bring you the latest George, Garden Route news'
Posted on: 06:30 Thu, 23 July 2015
Your Comments