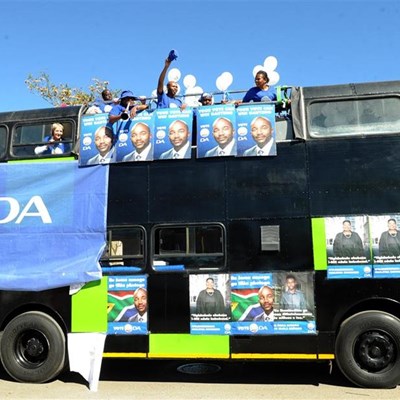 She chose a song by popular South African musician Zahara titled "Xabendino Mama" and a song by Brenda Fassie along with supporters before addressing them.

Zille said the Democratic Alliance wanted to rid the country of corruption.

"This is the kind of corruption that does not attract investors."

A lack of investors was causing a lack of jobs in the country.

Zille said there were no jobs in Gauteng but there would be if residents voted for the DA.

A man was welcomed into the party in full view of supporters and passers-by and given a DA T-shirt.

Two women whispered they also wanted DA T-shirts but would vote for the party once they had seen the changes Zille was promising.

Supporters chanted and sang praises to DA Gauteng premier candidate Mmusi Maimane and Zille. They also sang in Zulu that one day the word "corruption" would be destroyed.