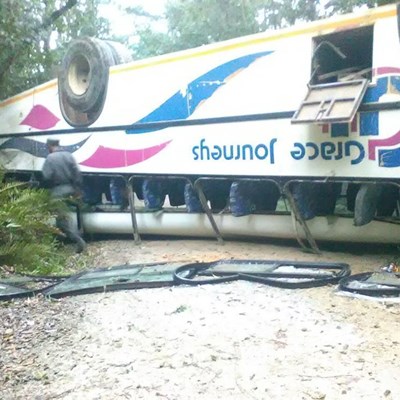 The bus that overturned earlier this morning. Photo: Knysna Traffic.
NATIONAL NEWS - Four children were injured when a bus overturned in Diepwalle, Knysna this morning.
The children were transported to a nearby hospital.
Nandi Mgwadlamba, communications manager for SANParks Garden Route, said the school bus was collecting learners from two schools in the Diepwalle area when the accident happened.
Paddy Gordon, park manager of the Garden Route National Park (GRNP) said SANParks will partner with MTO/Cape Pine and SAPS to investigate the matter as the safety of children is a priority.
The extent of the injuries of the children in hospital, ages and other information about them, is not yet known.
Read more on our sister publication, Knysna-Plett Herald.
Read more here.
'We bring you the latest Knysna, Garden Route news'