There are very few vehicles that can compete in two segments simultaneously. Take Toyota’s Land Cruiser Prado as a prime example. 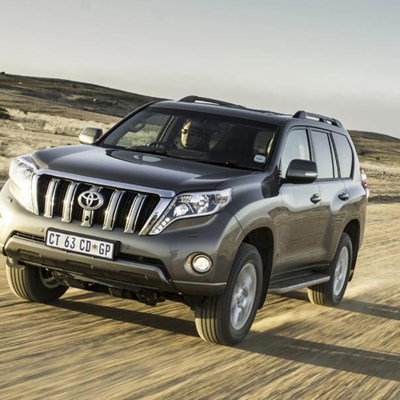 It manages the difficult task of taking on the likes of the BMW X5 in terms of urban kerb appeal while offering Mitsubishi Pajero levels of rugged off-road ability. Now in its fourth generation, the Prado recently underwent a mid-life refresh to help re-establish itself as a top multi-segment contender.

Changes include exterior enhancements such as a deeper front bumper, a redesigned grille that adds the new Toyota corporate identity to the off-roader’s visage and a new set of alloy wheels for both TX and VX variants. Alluding to the Prado’s off-roading pretentions are the new headlamp clusters complete with the Land Cruiser insignia that has been made higher so as to prevent damage when venturing off the beaten path.

Both the lower TX and flagship VX models have received new features and managed to increase in price by just 1% throughout the range. The TX model now gets heated outside mirrors, dual-zone climate control and new 17-inch alloy wheels while the VX adds blind-spot functionality, a tyre-pressure monitor and a set of 18-inch alloys. The blind-spot warning on the VX model alerts the driver of a vehicle on either side using millimetre-wave radars.

Both models also benefit from eight-way electrically adjustable seats on the driver and passenger side as well as Trailer Sway Control, which uses the vehicles’ electronic systems to prevent a trailer in tow from swinging side to side.

The interior is perhaps where the changes can be felt more easily. The materials have been upgraded, which adds the certain soft touch one expects from a vehicle costing upward of R600 000. The seven-seater now features a redesigned centre console that incorporates the new features. Good news for the passengers in the back is that legroom in the third row has been increased thanks to the floor being lowered by some 38,1mm.

The Optrition instrument binnacle on the VX model emits a blueish-white light that makes the speed and tachometer easier to read. In the middle of the new instrument cluster is a 4.2-inch colour TFT multi-information display that provides the driver with info such as wheel traction, steering angle and differential lock operation.

The dynamic-driving system’s interface has also received a more user-friendly makeover, with a redesigned dashboard as well as the seven-inch colour screen infotainment system, which on the VX model includes satellite navigation in addition to the standard reverse camera and multimedia functionality.

The Multi-Terrain Select system allows for the vehicle to be set up according to varying driving conditions. The system regulates wheel spin and also features multi-terrain ABS, which minimises brake lock-up to aid traction in off-road conditions. I can attest that the new system proved easy to use. The new dial configuration and large, clearly marked buttons mean that there is no confusion when it comes to selecting an off-road setting. Along with this comes the terrain monitor, which uses four cameras to relay imagery to the driver regarding what is happening around the front, rear and sides of the vehicle, which comes in handy when one is trying to avoid large rocks and obstacles.

Mechanically the Prado remains much the same as before, with a 4.0-litre V6 petrol and four-cylinder turbo-diesel making up the engine range. The former produces 202kW and 381Nm of torque. It is very refined affair piloting the V6. Watch out for the fuel consumption, however - the vehicle is mated to a five-speed automatic transmission and uses a claimed 11.5 litres/100km, but from my experience it can creep north of that figure quite easily.

The diesel is the one to have with a punchy 120kW and 400Nm of torque in combination with the same transmission. The claimed fuel consumption is 8.5 litres/100km, making the diesel a more realistic everyday option.