A supporter of US President Donald Trump wears a gas mask and holds a bust of him after he and hundreds of others stormed stormed the Capitol building.

INTERNATIONAL NEWS - Twitter and Facebook suspended Donald Trump on Wednesday over posts accused of inflaming violence in the US Capitol, as social media scrambled to respond to mayhem by supporters buying into his baseless attacks on the integrity of the election.

The unprecedented sanctions came after the president took to social media to repeat his numerous false claims about fraud and other impropriety in the election he lost to Joe Biden.

"This is an emergency situation and we are taking appropriate emergency measures, including removing President Trump's video," said Facebook vice president of integrity Guy Rosen.

"We removed it because on balance we believe it contributes to rather than diminishes the risk of ongoing violence."

Facebook barred Trump from posting at the social network or its Instagram service for 24 hours, saying his messages were promoting violence.

The new label reads: "Joe Biden has been elected president with results that were certified by all 50 states. The US has laws, procedures, and established institutions to ensure the peaceful transfer of power after an election.”

An activist group calling itself a mock Facebook oversight board said sanctions against Trump at the social network were long overdue.

"This is too little, too late," the group said in a statement.

"Donald Trump has breached Facebook's own terms and conditions multiple times. His account is not just a threat to democracy but to human life."

Permanent Twitter ban?
The crackdown came after Trump's supporters stormed the US Capitol in an attack that led to one woman being shot and killed by police, interrupting congressional debate over Biden's election victory.

The assault came after the president had urged supporters to march on the seat of government during a speech outside the White House in which he alleged baselessly that the election had been stolen from him.

He later released a video on social media in which he repeated the false claim - even telling the mob "I love you."

Twitter said Trump's messages were violations of the platform's rules on civic integrity and that any future violations "will result in permanent suspension of the @realDonaldTrump account."

The messaging platform said Trump's account would be locked for 12 hours and that if the offending tweets were not removed, "the account will remain locked."

Facebook said it would search for and remove content which praised the storming of the Capitol or encouraged the violence.

The platform said it would seek to take down additional calls for protests, including peaceful ones, if they violated a curfew imposed by the city of Washington, or any attempts to "re-stage" the storming of Congress. 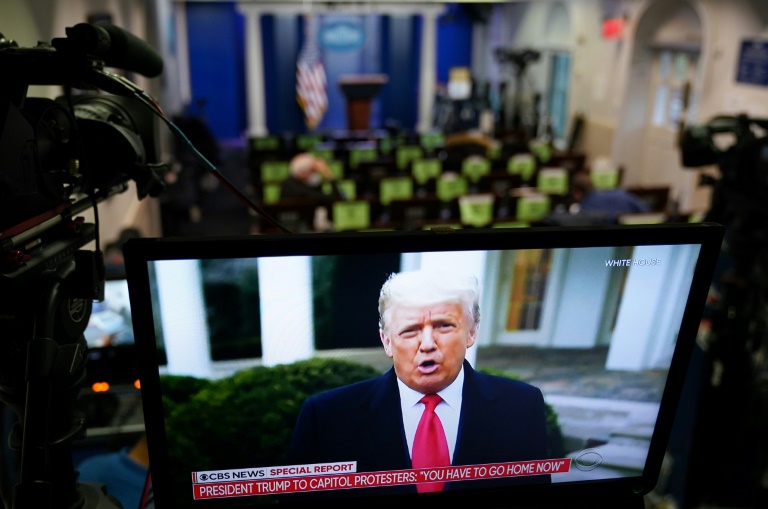 US President Donald Trump is seen on TV from a video message released on Twitter which was later taken down by the platform for breaking its rules.

"The violent protests in the Capitol today are a disgrace," a Facebook spokesperson said.

"We prohibit incitement and calls for violence on our platform. We are actively reviewing and removing any content that breaks these rules."

Facebook maintained that it was in contact with law enforcement officials and continued to enforce bans on QAnon conspiracy group, militarized social movements, and hate groups.